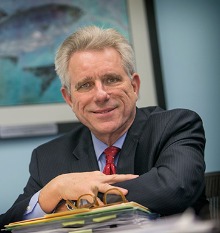 As Vice President for Research, Dr. Conover is the chief research officer/senior academic administrator at Stony Brook University, one of only 62 members of the prestigious Association of American Universities (AAU), and co-manager of Brookhaven National Lab. He is responsible for the campus-wide advancement of Stony Brook’s research mission and oversees the Research Foundation office at Stony Brook, supervising all research administration activities and functions at the campus. He reports directly to the President and is the primary advocate for the University’s research enterprise on the state, national and international levels.

Prior to his appointment in 2013 as Interim Vice President for Research, Dr. Conover served for three and-one-half years as the Director, Division of Ocean Sciences at the National Science Foundation (NSF) where he managed an annual budget in excess of $350 million and representing the bulk of financial support for basic research in ocean science at academic institutions across the Nation. In that role, Dr. Conover oversaw two major facility construction projects: the $386-million Ocean Observatory Initiative; and, the $200-million research vessel, R/V Sikuliaq, destined for operations in the Arctic Ocean. His duties at NSF also involved serving on the Steering Committee of the National Ocean Council, Co-Chair of the Subcommittee on Ocean Science and Technology (SOST), and implementation of the National Ocean Policy.

“David is a distinguished and respected scholar who demonstrated his commitment and competency as Interim Vice President, and I am very pleased that he will continue as the Vice President for Research,” said President Stanley. “The time he spent navigating Washington D.C. provided him first-hand experience with and knowledge of the policy-making and infrastructural processes for one of the largest federal funding agencies in the United States. He will be instrumental in helping Stony Brook fully leverage the management of Brookhaven Lab and fostering our initiatives with the Lab, SUNY and the State of New York in his capacity with the Research Foundation, and I look forward to working with him to advance Stony Brook’s always vital and growing research mission.”

In his role as Vice President for Research, Dr. Conover is responsible for encouraging and facilitating excellence in scholarship, research and creative activities. He is charged with accomplishing this by promoting collaborative research, scholarly and creative priorities set forth by the University’s strategic plans, encouraging investment in research infrastructure, increasing external funding from major public and private funding sources, advancing translational research for successful technology transfer and economic development, and ensuring compliance with all applicable laws and regulations related to the responsible conduct of research.

“I am thrilled, honored and thankful to have this opportunity to continue to serve this university as Vice President for Research,” said Dr. Conover. “I look forward to working with President Stanley and the members of the University Council, the University Senate, all faculty, students and staff and our external sponsors to advance research, innovation, and creativity at Stony Brook. The genesis of new knowledge and technologies is not only the foundation of great research universities like Stony Brook but also a wise investment in the future prosperity of our world. ”

As an expert on the ecology of marine fishes and fisheries science, he has authored over 125 publications. His most recent research involves determination of the long-term evolutionary (Darwinian) impacts of size-selective harvest regimes on the productivity of marine fish stocks. In 1997, Dr. Conover was named as the first recipient of the Mote Eminent Scholar Chair in fisheries ecology, a prestigious international award honoring those who have made major advances in the understanding of harvested marine species. He has also been the recipient of an Aldo Leopold Leadership Fellowship.

Dr. Conover joined the faculty of Stony Brook University as an Assistant Professor in 1981. He served as Associate Dean of Marine Sciences from 1995-97 and became Dean in 2003. Under Dr. Conover’s leadership, SoMAS greatly expanded its faculty, added two undergraduate majors, more than quadrupled its enrollment, acquired new waterfront research and education facilities, and increased its endowments ten-fold. He has served on the boards of the Consortium for Ocean Leadership, the National Association of Marine Laboratories, the Oceans and Atmospheres section of the National Association of State Universities and Land Grant Colleges, and was Chairman of the Board of the New York Sea Grant Institute. Dr. Conover also founded the New York Marine Sciences Consortium (http://nymsc.net/), an organization of 28 academic institutions with expertise in marine science research and education.