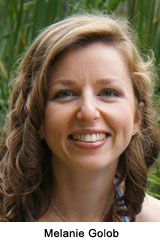 Biochemist from Washington and a Physicist from California receive top honors

STONY BROOK, NY
, June 1, 2014
– Alan Alda today announced the winners of Stony Brook University’s Flame Challenge contest, in which scientists had to explain “what is color?” in a way that would interest and enlighten 11-year-olds.

The winners, Melanie Golob and Dianna Cowern, received trophies and congratulations from Alda and hundreds of children at the “What is Color?” event at the World Science Festival in New York City.  Golob, a biochemist from Olympia Washington, won for the top-ranked written answer.  Cowern, who received her BS in Physics from MIT, won for the top-ranked video explanation. The entries were judged by nearly 27,000 schoolchildren from around the world including from Pakistan, Madagascar, Germany, Argentina, Australia and 41 states in the US! The winning entries, as well as other finalists, can be seen at the Flame Challenge website, www.flamechallenge.org.

In her Flame Challenge entry, Melanie Golob wrote, “One big step in improving science communication is to teach scientists doing the research how to explain their work in a way that’s easy to understand.”  This is precisely the goal of the Flame Challenge and the mission of the Alan Alda Center for Communicating Science.  The Alda Center teaches scientists how to engage their audience and distill their message through a series of graduate courses at Stony Brook University and by offering workshops around the country.  The Center also started an affiliate program to help other universities institutionalize communication training into graduate science education.

Melanie Golob, who got her Masters in Biochemistry from the University of California, Los Angeles, came up with the idea for her entry while reading a kid’s book to her two young sons about dogs not being able to see all of the same colors as people. “I love the idea of communicating science in any way, shape or form. So much of the scientific research that’s being done is hard to understand, yet incredibly important. I want to do what I can to help make it easier to understand.” 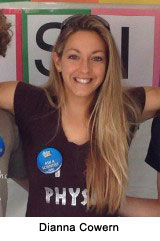 Dianna Cowern, who goes by the tag @thephysicsgirl, is very passionate about communicating science and is the outreach coordinator for the Physics Department at the University of California, San Diego.  Cowern started her own educational channel on YouTube called Physics Woman where she has videos talking about cool physics concepts like how to float a ping pong ball on air, to what is was like being a woman at MIT.

On winning the Flame Challenge, Cowern says, “Without avenues like the Flame Challenge to validate creative and accurate science communication, many, like me, may feel our science communication efforts are in vein; and we may lose the benefit of thousands of fantastic minds for whom science and expression are not separate.” She continues, “I have seen that “Ahaa!” moment when exploring science with a child and it amazes me! I hope one day that “Ahaa” moment will turn into a question, and the question will turn into a career. I hope this especially for young girls who are growing up in a world where their role-models are, on the whole, not scientists.”

The Flame Challenge aims to encourage scientists to explain complex material in ways non-scientists can understand. It is run by the Alan Alda Center for Communicating Science at Stony Brook University and was sponsored by the American Chemical Society and the American Association for the Advancement of Science (AAAS).

“The Flame Challenge is an amazing competition that we proudly support,” said Madeleine Jacobs, Executive Director and CEO of the American Chemical Society. “It takes scientists out of their comfort zone and challenges them to explain the world around us in simple, compelling ways that will invigorate young minds, arouse their natural curiosity, and potentially stimulate their interest in pursuing scientific careers. This year’s winners rose to that challenge and deserve our highest accolades.”

“The Flame Challenge is a marvelous way to coax scientists into communicating more clearly about their work,” said AAAS CEO Alan I. Leshner, who also serves as executive publisher of the journal Science. “It also sparks a genuine interest in science among the kids who do the judging. That is all to the good, whether they go on to become scientists themselves or simply better informed citizens on the value and joys of science.”

To find the Flame Challenge winners, entries from nearly 400 scientists were first screened for accuracy and then sent out to schools for judging by 11-year-olds. Entries came in from scientists around the world including From 25 different countries including New Zealand, Greece, Italy, Syria, Turkey, Sweden, Scotland, Brazil, Israel, India, Liberia, as well as the United States.

Alda, a visiting professor in the Stony Brook University School of Journalism and a founding member of the Center that now bears his name, launched the Flame Challenge in 2012 by asking scientists to explain a flame to an 11-year old in clear and concise terms. The Flame Challenge resonated with students and scientists around the world. Scientists submitted hundreds of answers, with Ben Ames, a physics doctoral student at the University of Innsbruck in Austria, taking home top honors for his cartoon video and original song.

This year, the other finalists for the written category were Luke Daniels, a neuroscientist from Ashland, Oregon, and Grigor Aslanyan, a physicist from New Zealand. For the video category, the other finalists were a team led by David Mayerich at the Beckman Institute for Advanced Science and Technology in Illinois, and Jessica Wilson (aka Dr. Pinkglasses), a PhD candidate in neuroscience at Northwestern University in Illinois.