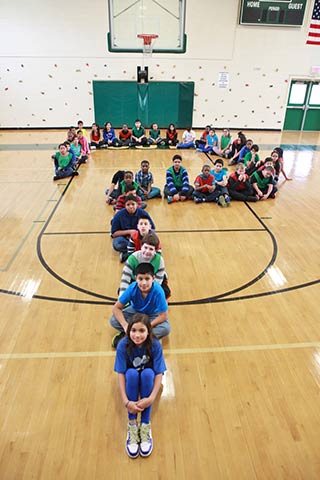 STONY BROOK, NY, DECEMBER 11, 2013 – The Alan Alda Center for Communicating Science at Stony Brook University is challenging scientists to answer a vibrant question asked by 11-year-olds around the country: What is color?

That is the question for this year’s edition of the Flame Challenge, an international contest that asks scientists to communicate complex science in ways that would interest and enlighten an 11-year-old. The Flame Challenge began in 2011 with actor and science advocate Alan Alda’s childhood query: What is a flame?

Alan I. Leshner, chief executive officer of the American Association for the Advancement of Science (AAAS), commended the Flame Challenge. “Communicating science in fun, thought-provoking ways is an important goal for all scientists as we face ongoing concerns about U.S. science education and the future science and technology workforce,” said Leshner, who also serves as executive publisher of the journal Science. “By rewarding scientists who make science more accessible to everyone, the Flame Challenge is also raising awareness of the importance of science within our society.”

What is color? It’s a fundamental question that spans the sciences. It can be answered from the perspective of physics, chemistry, or psychology, or even from a geological or oceanographic perspective. “We want scientists to think about how they can answer the question from their own field – from biology to physics to anthropology or psychology,” said Alda Center Director Elizabeth Bass.

To choose this year’s challenge, the Alda Center collected more than 800 questions from children, ranging from “Why do we laugh?” to “What will happen if a black hole swallowed the sun?” Lots of kids asked questions about light and about color, including some very specific ones: “How is color created?” “Does everyone see color the same?” “Is my blue their blue?”  And, one of the most classic childhood questions, “Why is the sky blue?”

Scientists have until March 1, 2014 to submit their answers in writing, video or graphics. The entries will be screened for scientific accuracy – and then judged by real 11-year-olds. Last year, nearly 20,000 students from around the world registered through their schools to serve as Flame Challenge judges. There will be two winners, one for a written entry and one for a visual (video or graphic) entry. The winning scientists will receive a trip to New York City, where they will meet Alan Alda and be honored at the World Science Festival. The Flame Challenge is generously sponsored by the American Chemical Society and the AAAS.

The previous Flame Challenge winners have been busy communicating science to audiences of all ages, from Canada to Germany to California. Ben Ames, a physics doctoral student at the University of Innsbruck and the inaugural winner in 2011, made a cartoon video with an original song to explain a flame to kids. Ben is finishing up his Ph.D. degree this summer and is busy working on producing a kids’ science show. Nick Williams won last year in the written category for his answer to the question, “What is time?”  Nick, a retired engineer, runs an outreach program, Fun with Science, forCalifornia’s Lawrence Livermore National Laboratory. Nick just got back from an adventure in Northern Alaska where he got students in a remote village excited about science. Steve Maguire, last year’s winner in the visual category, continues explainingcomplex science to kids in his web series, Science Isn’t Scary.

“The Flame Challenge is the perfect opportunity to step outside the ivory tower and connect with a different audience,” Steve Maguire said. “It doesn’t matter if the question is outside your field – I’m a chemist, and I had to explain a topic in physics. Whatever you do, don’t talk down to them. Kids are a lot smarter than adults give them credit for. They will also give the most bluntly honest criticism you’ll ever receive.”

For more information on entering or judging the contest, or to see last year’s top entries, please visit www.FlameChallenge.org.

The Flame Challenge’s sponsors are both major nonprofit scientific societies. The American Chemical Society is chartered by the U.S. Congress and is a global leader in providing access to chemistry-related research. ACS encourages each of its 164,000 members to speak simply about their science and its importance to all of our lives. The American Association for the Advancement of Science (AAAS), the world’s largest multidisciplinary scientific society and publisher of the journal Science, was founded in 1848. It includes some 261 affiliated groups, serving a total of 10 million individuals, and its mission is to “advance science and serve society.”