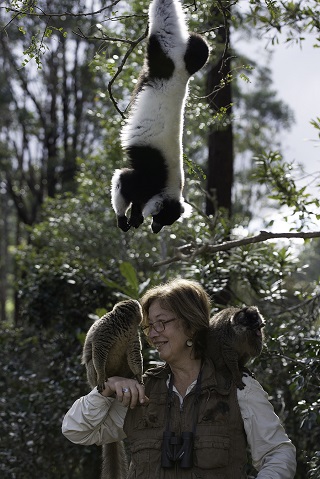 STONY BROOK, NY, March 24, 2014 – Stony Brook University’s 2014 “Stars of Stony Brook” Gala will honor devoted primatologist and conservationist Dr. Patricia C. Wright, on Wednesday, April 16 at Pier Sixty at Chelsea Piers in New York City.  As she is being feted by her University, Dr. Wright will be enjoying stardom of another stripe, with her extraordinary work with lemurs and other wildlife of Madagascar being the central storyline of the new IMAX® documentary Island of Lemurs: Madagascar
. The film is narrated by Academy Award® winner Morgan Freeman and set for release in select IMAX® and IMAX®3D theatres starting April 4.

A recipient of the MacArthur “Genius Award” and finalist for the 2014 Indianapolis Conservation Prize, Dr. Wright is being honored for her major contributions in the biology, ecology, conservation and behavior of living primates.  She has also been instrumental in helping both indigenous people and the international community better understand the value of conservation in Madagascar and around the world.  Through the research station she created there known as Centre ValBio, Dr. Wright has continued to deliver her expert knowledge and support to help both the wildlife and residents of this region.

“Being able to showcase the work of one of our own and share it with the world through Island of Lemurs: Madagascar is truly remarkable,” said Richard L. Gelfond, CEO of IMAX Corporation who also serves as Chairman of the Stony Brook Foundation Board of Trustees and Co-Chair with James H. Simons of the Stars of Stony Brook Gala.  “Dr. Wright’s work is inspiring and eye opening.  Her expertise on the lives of these magnificent creatures and other wildlife in Madagascar is one I know will touch the hearts of many as well as bring awareness to a part of the world not often seen.”

Dr. Wright began working in Madagascar 29 years ago with the intent of tracking down a lost species of lemur.  Her field research eventually blossomed into a full-blown conservation and humanitarian endeavor as she led the effort to establish Ranomafana National Park and coordinate outreach programs to help the struggling villages abutting the park.

“The first time I visited all these villages, about 60 of them, was 1987, and I realized how poor the people were and how much they really needed assistance,” said Dr. Wright. “And I wanted to do whatever I could to make their lives better.”

As a result of Dr. Wright’s work, Stony Brook University is more invested than ever in her mission in Madagascar.  Along with the Centre ValBio research center, the University has also teamed up with scientists/husband and wife duo, Jim and Robin Herrnstein, to establish the Global Health Institute. The Institute will drive cutting-edge health research in the region while working closely with the Herrnsteins’ new nongovernmental organization (NGO) PIVOT, whose mission is to establish an evidence-based model health system for Madagascar.

Currently in its 15th year, the Stars of Stony Brook Gala has been able to bring together stars from Hollywood, the arts and academia, including Alan Alda, Ed Harris, Julie Andrews and this years’ Dr. Patricia C. Wright, as spokespersons for various scholarships and charities.  Over the years, the Gala has raised over $33 million to support student scholarships and a variety of educational programs at the university and around the globe.

The Stony Brook Gala begins with a cocktail reception on April 16 at 6:30 p.m. at Chelsea Piers, followed by dinner at 7:30 p.m. To reserve tickets, inquire about sponsorship, or for more information, call 212.245.6570, ext. 15 or emailtamaral@eventassociatesinc.com

The Stony Brook Foundation is a not-for-profit 501(c)(3) corporation established in 1965 as the University’s sole repository for philanthropic contributions from individuals, corporations, foundations, and other organizations in support of Stony Brook University. The Foundation administers the University’s scholarship funds. Every dollar donated for scholarships goes directly to scholarships—no administrative fee is charged on scholarship accounts. For more information about contributing to our scholarship funds or creating an endowed named undergraduate scholarship or graduate fellowship, please call the Advancement Office at (631) 632-6300 or visit
www.stonybrook.edu/foundation.