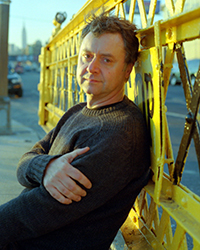 STONY BROOK, N.Y., December 9, 2014 – As author of several international best-sellers with science and math themes, host of the PBS series “Discovering the Great Minds of Science,” long-time editor-in-chief of Discover magazine, and now president and CEO of Liberty Science Center, Paul Hoffman has his finger on the pulse of scientific breakthroughs.

Now, he is part of a ground-breaking initiative to actually discover and fund one such endeavor.

He has been tapped to serve as Master of Ceremonies for the Inaugural Stony Brook Discovery Fund Prize competition, a unique “Shark Tank” meets “TED Talk”-type program created by the Stony Brook Foundation (of Stony Brook University) to support pioneering scientific breakthroughs with philanthropic giving in response to declining federal grants for basic research.

The prize ceremony, being held this Thursday, Dec. 11 from 10:30 a.m. to 12:30 p.m. at the Simons Foundation, 160 Fifth Ave. (at 21st St.) in Manhattan, will feature four young researchers at Stony Brook University who will present their scientific ideas to a panel of distinguished judges with $200,000 in research funding on the line.  The judges are Peter C. Agre, MD, winner of the 2003 Nobel Prize in Chemistry and professor at Johns Hopkins University; Robert Shelton, PhD, president of the Research Corporation for Science Advancement and former president of University of Arizona; James H. Simons, PhD, chairman of the Simons Foundation, founder of Renaissance Technologies, and former chairman of the mathematics department at Stony Brook University; and Esther Takeuchi, PhD, holder of 150 patents and Distinguished Professor of Chemistry and Materials Science and Engineering at Stony Brook University.

Unique to the Discovery Fund Prize competition is the aim to further the art of effective science communication, through the involvement of the actor, director, and writer Alan Alda, and the Alan Alda Center for Communicating Science at Stony Brook University. At the Dec. 11 ceremony, the four finalists’ presentations will challenge them to communicate their research concepts in 10 minutes. This will help them better understand the skills required to clearly convey scientific meaning and import—skills they will need to apply for, and win, grants from public agencies, as well as to communicate the importance and excitement of science to political and industry leaders as well as members of the general public.

“What an amazing honor it is to be included among such luminaries and for such an innovative and essential program to discover and fund breakthrough scientific research,” Hoffman said.  “Given diminishing federal support for basic research, it is imperative that new avenues are created to fund this research.  Not only has Stony Brook opened such an avenue with its establishment of the Discovery Fund, it’s done so in a distinctive and interesting way with its prize competition.”

“We’re pleased that Paul Hoffman is serving as master of ceremonies for the Discovery Fund Prize ceremony,” said Stony Brook President Samuel L. Stanley Jr., M.D.  “Throughout his professional career, he has been a champion of science and an expert of heightening public awareness, understanding and appreciation for science. And in all he has done, he has stayed true to the same convictions that Alan Alda and all of us at Stony Brook share:  science should be engaging, accessible, and relatable.”

President Stanley explained that the Discovery Fund is a means to champion Stony Brook faculty who dare to tackle the biggest ideas in science. “The new cures for cancer, the solutions to climate change, and the pathways to the long term survival of our planet lie in basic research,” he said. “With the Discovery Fund, we can continue to support our faculty as they seek to advance new knowledge through basic science research.”

Gábor Balázsi is the Henry Laufer Associate Professor in the Laufer Center for Physical & Quantitative Biology in the Department of Biomedical Engineering. He saw increasing evidence that cells become abnormal even without genetic mutations. He developed tools that artificially increase or decrease the fraction of abnormal cells without introducing mutations; he’s trying to discover how non-genetically abnormal cells and cellular diversity inside tumors affect cancer progression. Once understood, it may then be possible to develop medications to control cellular diversity and increase treatment efficiency.

Eden Figueroa is an Assistant Professor of Physics in the Department of Physics and Astronomy, working with Tzu-Chieh Wei, Assistant Professor in the C.N. Yang Institute for Theoretical Physics at Stony Brook University.  His lab is trying to create new technology based on quantum mechanics. He and Wei are seeking to measure and control quantum mechanical effects at room temperature in atomic gases; this could lead to a quantum processor.

Emre Salman is an Assistant Professor in the Department of Electrical and Computer Engineering, working with Milutin Stanaćević, an Associate Professor in the department. He is proposing a novel method for performing computation in energy-autonomous systems that “harvest” power from ambient sources. He and Stanaćević want to recycle electrical charge in a unique way that particularly fits wireless power harvesting systems; the proposed method significantly increases energy efficiency and computational capability.

Laurie T. Krug is an Assistant Professor in the Department of Molecular Genetics and Microbiology, collaborating with Balaji Sitharaman, Associate Professor, Department of Biomedical Engineering. Her laboratory researches herpes viruses that are associated with cancer. She is working with Sitharaman to pursue their idea of delivering molecular scissors to the site of virus infection using nanoparticles.

The Discovery Fund is Stony Brook’s response to a nationwide call to augment public funding of university research with philanthropic support. The Fund was created by the Stony Brook Foundation, a nonprofit corporation whose mission is to raise and manage private philanthropic gifts, grants, and funds to advance the goals of Stony Brook University. The Discovery Fund is one of 15 such funds supported by universities in the Science Philanthropy Alliance (link to: sciencephilanthropyalliance.org) which are working together to increase private investment in fundamental research.