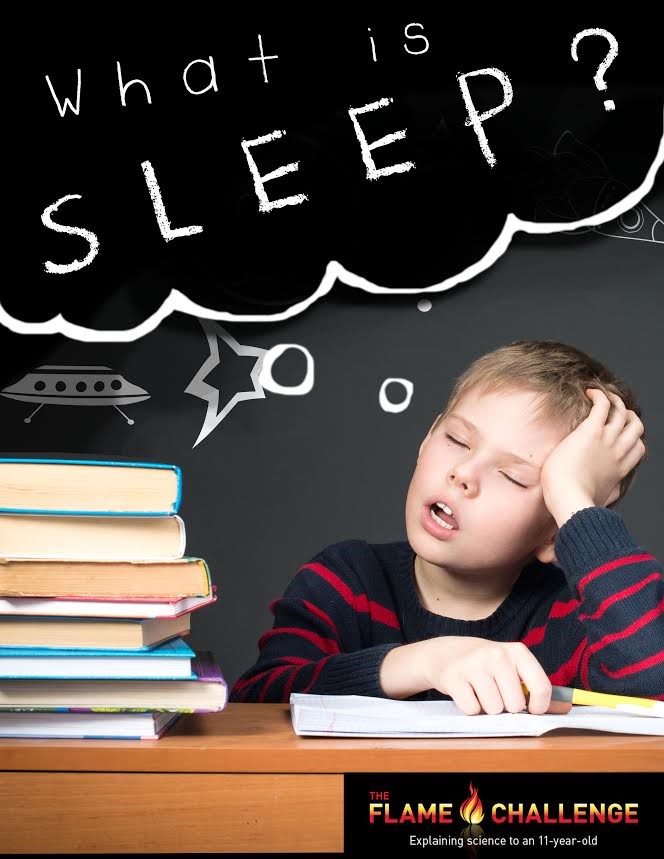 STONY BROOK, NY, DECEMBER 2, 2014 – The Alan Alda Center for Communicating Science at Stony Brook University is challenging scientists to answer an eye-opening question:  What is sleep?

That is the wake-up call for scientists in this year’s edition of the Flame Challenge. In this international contest, scientists – from graduate students to senior researchers – are challenged to communicate complex science in ways that will interest and enlighten 11-year-olds, who judge the contest.

“I came up with this contest as a fun challenge for scientists to explain a complex thing like a flame in a way that would make it clear to an 11 year old,” said actor, writer and science advocate Alan Alda, a visiting professor at Stony Brook University.  “The idea was to urge scientists to communicate more clearly. I didn’t realize what an extraordinary learning experience it was going to be for the 11-year-olds. By now, tens of thousands of kids from all over the world have excitedly delved into the mysteries of nature as they’ve judged the scientists’ entries.

“This year’s question — “What is sleep?” — should wake them up to a whole new understanding of that third of our lives we know so little about,” said Alda.

Besides kicking off the Flame Challenge, the multi-tasking Alda is currently appearing on Broadway in the play “Love Letters.”

Scientists have until Feb. 13, 2015 to submit their answers in writing, video or graphics. This year, for the first time, a $1,000 cash prize will go to the scientists who submit the two winning answers, one written entry and one video or graphic entry.  In addition, as in past years, the winning scientists will receive a trip to New York City, where they will meet Alan Alda and be honored at the World Science Festival in May, 2015. The Flame Challenge is generously sponsored by the American Chemical Society (ACS) and the AAAS.

The entries will be screened for scientific accuracy before being judged by schoolchildren around the world. Last year, 27,000 students were registered through their schools to serve as Flame Challenge judges. The Flame Challenge began in 2011 with actor and science advocate Alan Alda’s childhood query: What is a flame? Since then, the questions have been chosen from hundreds submitted by children. In 2012, scientists wrestled with “What is time?” Last year, they took on “What is color?”

“The Flame Challenge is an ingenious competition that we proudly support,” says 2015 ACS President Diane Grob Schmidt. “It challenges scientists to explain the world around us in ways that are both understandable and engaging to children. In doing so, the Flame Challenge has ignited a bonfire of interest among children worldwide. It is truly a spark that could help inspire them to explore careers in science and find ways to address the many global challenges facing all of us.”

“This is the first Flame Challenge that asks a question about something that happens inside our brains and our bodies,” said Elizabeth Bass, director of the Alda Center. “We hope that inspires past Flame Challenge contestants to try again, and also attracts people in psychology, medicine and all the cognitive sciences. But the winners don’t necessarily have to be specialists in the topic — they mainly have to focus on understanding what 11-year-olds might know and care about.”

This year’s question, “What is sleep?” was submitted by Ms. Wohlberg’s sixth grade class from Garden City Middle School in New York.   Several other students from around the country asked related questions, such as “What are dreams?” In an online poll of children about the next Flame Challenge question, “What is sleep” strongly outpolled questions about electricity, wind, germs and how scientific discoveries are made.

At the Flame Challenge website, www.FlameChallenge.org, scientists can find more information on entering the contest, and teachers can find information on having their classes participate as judges.    The website also contains past winning entries and tips from past winners about how to come up with a good entry.

“The Flame Challenge is unique,” said one of last year’s winners, Melanie Golob of Olympia, WA. “It not only educates us as the scientists who answer the question, but it also gives kids the opportunity to deeply engage in a discussion on a complex scientific topic. This can be the spark that ignites a lifelong passion for science.”

Like many of the past winners, Golob is active in communicating about science to the public. Besides working for a company called Doctor Evidence, she is creating a science TV show called “Science This!” applying real science to everyday situations (or not-so-everyday situations); the website is science-this.com.

The Flame Challenge’s sponsors are both major nonprofit scientific societies. The American Chemical Society is chartered by the U.S. Congress and is a global leader in providing access to chemistry-related research. ACS encourages each of its 164,000 members to speak simply about their science and its importance to all of our lives. The American Association for the Advancement of Science (AAAS), the world’s largest multidisciplinary scientific society and publisher of the journal Science, was founded in 1848. It includes some 261 affiliated groups, serving a total of 10 million individuals, and its mission is to “advance science and serve society.”