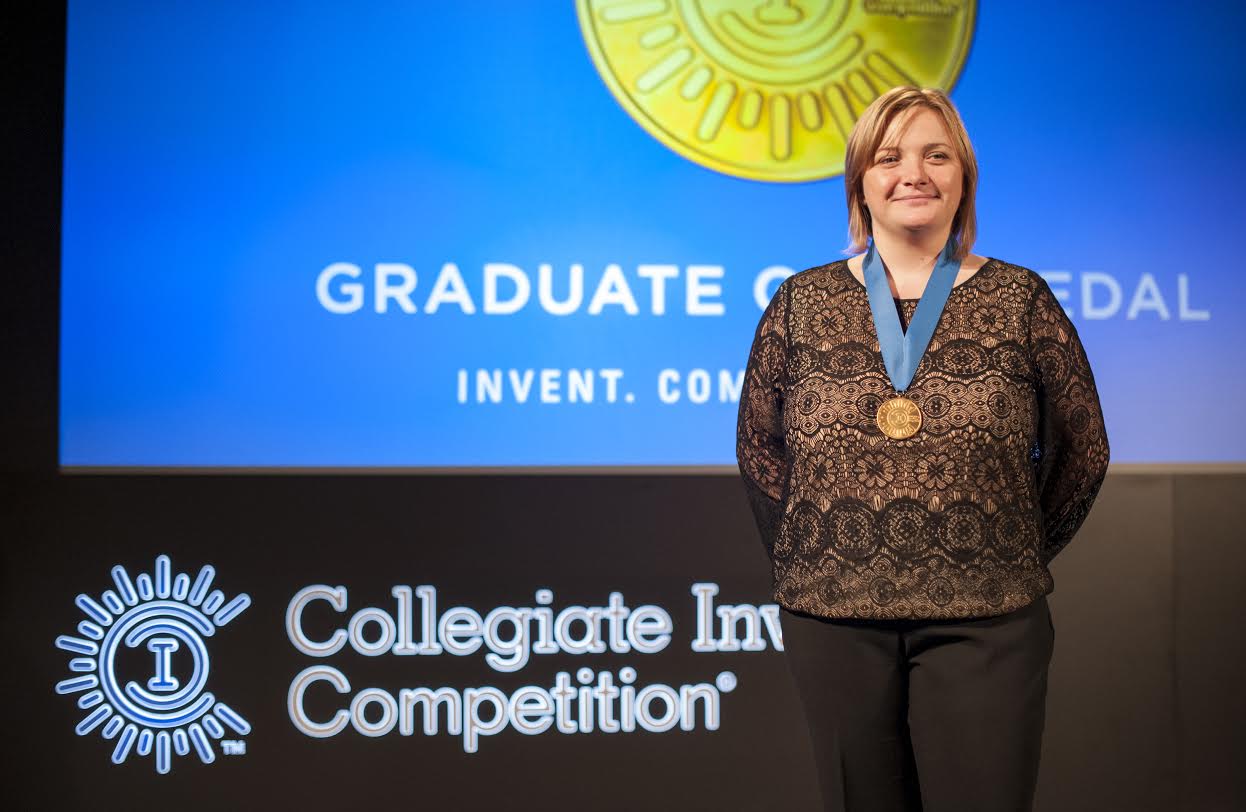 STONY BROOK, NY, Nov. 21, 2014 – Three-time Stony Brook University graduate, Katarzyna (Kasia) M. Sawicka, PhD (’04, ’05, ’14), won first prize in the graduate division of the national Collegiate Inventors Competition for her invention of “ImmunoMatrix,” a needleless vaccination that is as simple as putting on a Band-Aid®. The first of its kind, ImmunoMatrix is a non-invasive skin patch that uses nanofibers to hold and effectively deliver a vaccine through the skin; it’s painless, self-administered, and doesn’t produce bio hazardous waste.

According to Sawicka, ImmunoMatrix “busted” the 500 Dalton Rule, which argues that the molecular weight (MW) of a compound must be under 500 Dalton to allow skin absorption; ImmunoMatrix successfully delivers a molecule 250 times the size. Sawicka was among 35 students in 14 finalist teams (seven graduate and seven undergraduate) from 13 universities and colleges across the United States.

​“Bringing the concept of infectious disease immunization without the use of needles to this stage is a great advancement to our field, and I congratulate Kasia and her team for their first place award in the national Collegiate Inventors Competition,” said Stony Brook University President Samuel L. Stanley Jr., M.D. “We are excited to see the outcome of the next phase of Kasia’s work on ImmunoMatrix.”

ImmunoMatrix is easy to transport and stable at room temperature. The skin patch has successfully tested and used to combat the flu, pertussis (whooping cough), anthrax, and with other antigens and macro molecules. Sawicka plans on exploring the commercialization of the ImmunoMatrix technology and hopes to see it brought to practical use in clinics and hospitals worldwide.

“I am extremely honored to be recognized by some of the nation’s greatest inventors, who served as judges at the Collegiate Inventors Competition,” said Sawicka. “This award symbolizes a decade of research that I was able to accomplish thanks to the help from excellent Stony Brook undergrads that I was able to convince to work with me.”

“Katarzyna is an example of perseverance, and a symbol of the innovative ideas so many higher education students are developing every day across our country,” said Hannah Paulin, VP, Business Development, Invent Now. “She never gave up on the potential of her ideas and improved upon something that had been done the same way for hundreds of years. That’s innovation and that is how she – and all of our 2014 Finalists – earned a place among the most brilliant students in our country.”

Sawicka received a BS in Engineering Chemistry ’04, a MS in Chemistry ’05, and a PhD in Biomedical Engineering ’14 from Stony Brook University. She now works as a post-doctoral research associate for the Department of Dermatology at Stony Brook. Sawicka graduated from Longwood High School and currently resides in Miller Place, NY.

About Stony Brook University
Part of the State University of New York system, Stony Brook University encompasses 200 buildings on 1,450 acres. Since welcoming its first incoming class in 1957, the University has grown tremendously, now with more than 25,000 students, 2,200 faculty and 20 NCAA Division I athletic programs. Its membership in the prestigious Association of American Universities (AAU) places Stony Brook among the top 62 research institutions in North America. U.S. News & World Report ranks Stony Brook among the top 40 public universities in the nation and Kiplinger named it the 29th best value in public colleges for in-state students and 20th for out-of-state students. One of four University Center campuses in the SUNY system, Stony Brook University co-manages Brookhaven National Laboratory, putting it in an elite group of universities that run federal research and development laboratories. As the largest single-site employer on Long Island, Stony Brook is a driving force of the regional economy, with an annual economic impact of $4.65 billion, generating nearly 60,000 jobs, and accounts for nearly 4% of all economic activity in Nassau and Suffolk counties, and roughly 7.5 percent of total jobs in Suffolk County.

About the Collegiate Inventors Competition
The Collegiate Inventors Competition recognizes and rewards undergraduate and graduate students who are committed to research, discovery, invention and innovation as they address the problems of today’s world. The Competition specifically recognizes and rewards the innovations, discoveries and research by college university students and their advisors for projects leading to inventions that may have the potential of receiving patent protection. Introduced in 1990, the Competition has awarded more than $1 million to winning students for their innovative work and scientific achievement through the help of its sponsors.