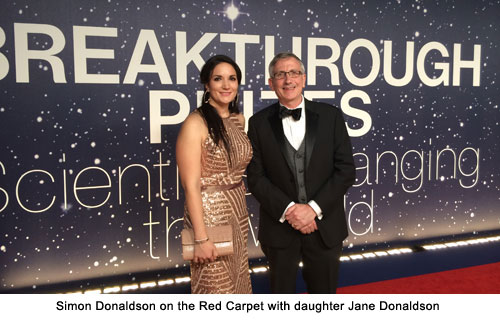 “It is a great honor to receive the Inaugural Breakthrough Prize in mathematics and to be part of this terrific celebration of science and mathematics,” Sir Simon Donaldson said. “This is a unique opportunity to spotlight many of the exciting developments in our field and to help others – especially young people – understand why mathematics is so important in our contemporary society. I share this honor with my colleagues and students at Stony Brook University’s Simons Center for Geometry and Physics.”

“The Breakthrough Prize is a recognition that is well deserved for Sir Simon Donaldson, a celebrated mathematician and visionary,” said Samuel L. Stanley, Jr. M.D., President of Stony Brook University. “It also is a mark of distinction for the Simons Center for Geometry and Physics and more generally for our Department of Mathematics, which continues to provide our students with an education of the highest order.”

“Professor Donaldson is an outstanding mathematician, whose work has been extraordinarily influential in both mathematics and theoretical physics. The influence of his published work has been further amplified by his remarkable generosity in sharing ideas with colleagues, as well as, of course, with his own students.  Stony Brook is indeed fortunate to have Professor Donaldson in its midst,” said Jim Simons, research professor and former chair of the Department of Mathematics at Stony Brook University, and chairman of the board of the Simons Foundation.

“Most people think of math as a purely analytical discipline, but it’s also something that’s very profound and creative,” said Facebook founder Mark Zuckerberg. “And just as we celebrate the work of writers, artists and musicians, we also need to celebrate the brilliant and original contributions of mathematicians that are changing our lives and will change our lives in the future.”

The ceremony was produced and directed by Emmy Award-winning Don Mischer Productions and will be simulcast in the United States on Discovery Channel and Science Channel on November 15 at 6 PM ET/PT, and televised globally the weekend of November 22 on BBC World News.