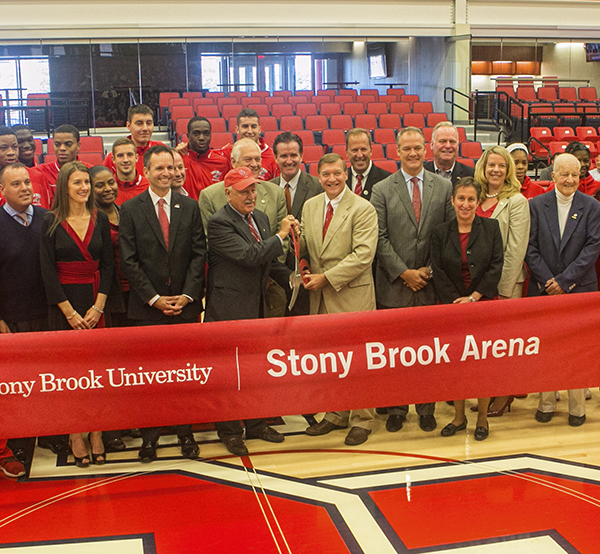 New $21.1 Million Arena Will Be a Long Island Hub for Athletics and Entertainment

“I want to thank everyone who contributed to this project,” President Stanley said. “None of this would be without having champions in the legislature who really made this possible. Senator LaValle’s support for Stony Brook is unwavering and we owe him a debt of gratitude for once again championing another critical project at Stony Brook University.

“This is such a critical facility for athletics as the home of our men’s and women’s basketball teams and it’s also going to be a great venue for other events, making it a signature destination, not only for Stony Brook University but for Long Island and this region.”

“What is critical about this building and every other building at the University is that we have to be competitive with our peer institutions,” Senator LaValle said. “We are attracting the best and brightest students and athletes in the country. When our potential men’s and women’s basketball players are looking at this university, they will look at this beautiful arena. This arena will embrace them and say you are going to be a Seawolf.”

“We are here to create first-class experiences,” Heilbron said. “That is what we do, and everything that we do is to positively transform the life of a student-athlete. That’s our vision. I think we are living up to that vision with the opening of this building. This is first-class. Our student-athletes who are here today are going to get the opportunity to experience this and experience a home-court environment and a first-class experience of competing, training, learning in a building that people will envy, not only among our conference peers but programs across the country.”

“This arena has been built by a lot of people, brick-by-brick,” Pikiell said. “I want to thank everyone who had a part in this. What I am most excited about is this arena truly reflects our University. We are young, we are world-class, we are exciting and we are high-tech. I am most proud to be the head coach here, and I promise that our program will continue to represent this University with class and dignity and continue the mission that our President, Senator and Athletics Director have put forward. I look forward to everyone cutting down the nets with us very shortly.”

“Since I have been here, it is amazing to see how much the athletic program has grown,” Jenkins said. “And it’s amazing to think about all that we can do in this new arena. We are really looking forward to it. Thank you all for your support and continued commitment.”

The first official general public event happens Saturday, Oct. 4 when the world renowned Harlem Globetrotters christen the arena with a pair of shows at 2 and 7 p.m. The basketball teams will play their home openers during Stony Brook Arena Tip-Off Weekend Nov. 14-15 when the men’s team hosts Columbia on Nov. 14 at 7 p.m., and the women’s team plays St. Peter’s on Nov. 15 at 7 p.m.