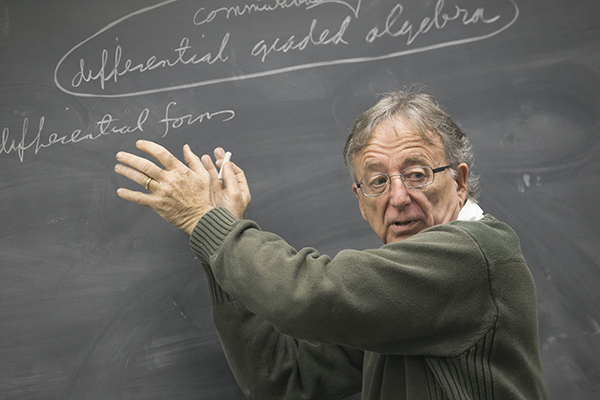 STONY BROOK, NY, September 29, 2014 – Dennis Parnell Sullivan, PhD, Professor of Mathematics at Stony Brook University and the Albert Einstein Professor of Science and Distinguished Professor of Mathematics at the City University of New York Graduate School and University Center, is the recipient of the 2014 Balzan Prize for Mathematics (pure or applied). He was selected by the International Balzan Prize Foundation for his “major contributions to topology and the theory of dynamical systems, opening new perspectives for generations to come. For his exceptional results in many fields of mathematics, such as geometry, the theory of Kleinian groups, analysis and number theory.” The Prize comes with a financial award of 750,000 Swiss Francs ($800,000 USD), half of which must be used to support to research projects.

“I am excited by the research opportunity the Balzan Prize affords,” said Dennis Sullivan. “With the efforts of a group of young researchers working full time I hope to organize a practical testing of heavily structured theoretical algorithms that we have been forging over a long time span. We want to know if these algorithms applied numerically might predict successfully where hurricanes hit our southern coastline or the efficiency of dispersion of pollutants that turbulent winds achieve or the scale of vortex swirls created behind tips of airplane wings. It is fascinating and challenging that these problems are up to the present day mathematically intractable.”

“This is a tremendous honor for Dennis Sullivan, a visionary mathematician and scholar,” said Stony Brook University President Samuel L. Stanley Jr., M.D. “As Dennis continues to blaze new trails, Stony Brook is extremely fortunate to be a place he calls home. ​ Dennis is an extraordinary mentor, so it is particularly meaningful that this prize will also benefit the students and post-doctoral fellows engaged in his groundbreaking work.”

“When I came to Stony Brook in 1968 to chair the Mathematics Department I tried very hard to recruit Dennis, but to no avail.  It was clear then, in his late twenties, that he was one of the most outstanding mathematicians of his generation. That judgment is even truer today than it was then as the breadth and depth of his work has continued to grow.  Of course Dennis eventually did come to Stony Brook, enriching the department and the University. His Balzan Prize was well deserved indeed!” said Jim Simons, Chair of the Simons Foundation, and founder and board chair of Renaissance Technologies LLC, and former chairman of the Department of Mathematics at Stony Brook University.

“This renowned mathematician is well-deserving of this prestigious recognition for his major contributions to topology and the theory of dynamical systems,” said Dennis N. Assanis, Provost and Senior Vice President for Academic Affairs at Stony Brook University. “Dennis is an exceptional mathematician who has pioneered these exciting new areas, and his influence and discoveries will have a major impact on many future generations of mathematicians to come.”

The International Balzan Prize Foundation’s aim is to promote culture, the sciences and the most meritorious initiatives in the cause of humanity, peace and fraternity among peoples throughout the world. The Balzan Prizes are chosen by the General Prize Committee in two general subject areas: Literature, Moral Sciences and the Arts; and the Physical, Mathematical and Natural Sciences and Medicine. The four Balzan Prizes, two per category, are awarded to scholars, artists and scientists who have distinguished themselves in their fields on an international level.

Born in Port Huron, Michigan on February 12, 1941, Dennis Sullivan grew up in Houston, Texas and attended Rice University where he started out as a chemistry major. He switched from chemistry to mathematics and earned his BA in 1963. He then went to Princeton University for graduate studies in mathematics, and earned his PhD in 1966. That same year, Sullivan was awarded a NATO Fellowship at Warwick University in England after which he earned a Miller Fellowship at the University of California at Berkeley (1967-69), and went to the Massachusetts Institute of Technology as The Sloan Fellow of Mathematics (1969 -73).

He spent the 1973-74 academic year in France as professeur associé at the University of Paris-Orsay and became in 1974 a permanent professor at the Institut des Hautes Études Scientifiques. In 1981 he was appointed to the Einstein Chair at the City University of New York working jointly with the Institut des Hautes Études Scientifiques until 1996.

He received the Oswald Veblen Prize in Geometry (1970), the Elie Cartan Prize in Geometry (1981), the King Faisal International Prize for Science (1994), the Gold Medal of the Brasilian Academy of Sciences (1996), the US National Medal of Science (2004), the AMS Steele Prize for Lifetime Achievement (2006) and the Wolf prize for Mathematics (2010).

The Work of Dennis Sullivan – A Snapshot, by
Etienne Ghys

Algebraic topology is the study of topology using algebraic tools. The theory is particularly useful when algebra allows a complete description of topology.

At the beginning of his career, Dennis Sullivan was one of the main proponents of (mathematical!) surgery theory. He made a fundamental contribution to the Hauptvermutung, which concerns the different ways of triangulating space. He also obtained a complete classification of simply connected high-dimensional manifolds, for which the homotopy type is known. His article “Genetics of homotopy theory and the Adams conjecture” represents a remarkable step forward.

Later, he developed (along with Quillen) rational homotopy theory, which is one of the mathematical gems of the twentieth century. A purely algebraic structure — Sullivan’s minimal model — makes it possible to completely reconstruct the rational homotopy type of a space. “Infinitesimal computations in topology” is one of the most important texts on algebraic topology in the twentieth century, of similar stature to Poincaré’s seminal paper “Analysis Situs”.

In the second part of his career, Sullivan transformed the theory of dynamical systems. The study of complex dynamics, initiated by Fatou and Julia at the beginning of the twentieth century, had been neglected, until Sullivan applied and developed useful, “quasiconformal” tools from harmonic analysis. The theory was revolutionary. Among his other work on this theme, his “Non wandering theorem” with its magnificent proof is particularly notable.

Sullivan has an overall, unitary vision of mathematics. For example, the concept of The Sullivan Dictionary provides parallels for theories that might seem far apart, for example, the dynamics of rational fractions and Kleinian groups. At the end of the 1970s, the physicists Coullet-Tresser and Feigenbaum conceptualized the phenomenon of universality in the transition towards chaos. Sullivan succeeded in placing the problem in an appropriate context, thanks in particular to analogies with non-Euclidean geometry. The proofs for different forms of the renormalisation conjecture were made possible by Sullivan’s impetus.

He is currently working on topological field theory and formalism in string theory. Once again, he is concerned with understanding the nature of space through the power of algebra. For example, with Chas, he developed the field of ‘string topology’. His universal vision of mathematics has led to an interest in fluid dynamics, to which he takes an extremely original approach.

Among his most important scientific publications:

·         1985. Quasiconformal homeomorphisms and dynamics I: Solution of the Fatou-Julia Problem on Wandering Domains, Annals of Mathematics 122