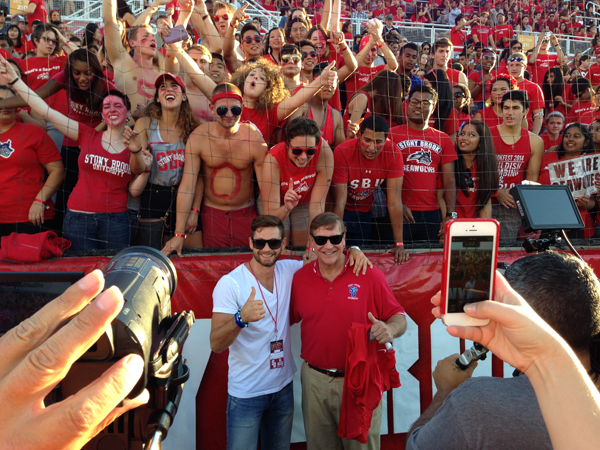 STONY BROOK, NY (September 27, 2014) —  For the first time since graduating with a BS in Health Care Management in 2007, undefeated WBO junior welterweight champion
CHRIS ALGIERI
returned to his alma mater for Stony Brook’s homecoming football game and Wolfstock Festival, where he was recognized by the Stony Brook University Alumni Association as Alumnus Fan of the Game. Algieri, accompanied by his family and friends, spent the earlier part of the day meeting other alumni during the pregame festivities at the Wolfstock Festival, and later was presented an official Seawolves Football jersey from President Samuel L. Stanley Jr., M.D., and a game ball from Athletic Director Shawn Heilbron during an on field presentation. Algieri, a native of Huntington, New York and graduate of St. Anthony’s High School, also received a proclamation from Suffolk County Executive Steve Bellone, naming September 27 “Chris Algieri Day” in Suffolk County. During halftime, Algieri returned to mid-field to present a replica of his WBO Jr. Welterweight Championship belt to his alma mater, which Dr. Stanley accepted on behalf of the University. He also announced that he is establishing the “Chris Algieri Championship Lifestyle Scholarship” at Stony Brook. 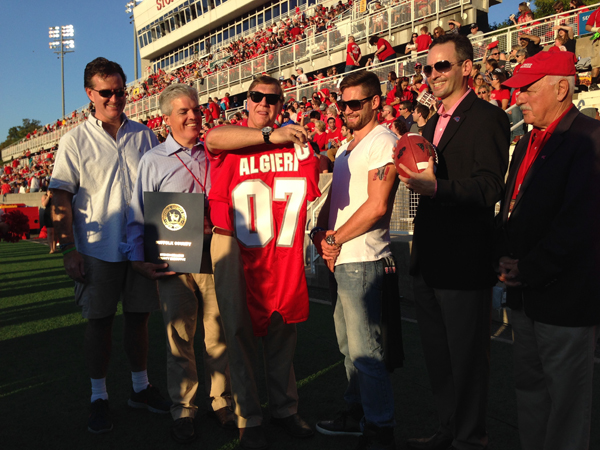 Algieri (20-0, 8 KOs), gearing up to face Fighter of the Decade Congressman
MANNY “Pacman” PACQUIAO
, has become boxing’s No. 1 story, as well as being hailed as the 21st century real-life Rocky. Over the last 22 months Algieri, a former kickboxing champion, has elevated himself from a prospect to a world-class contender to a world champion. After accumulating significant victories over top prospect Jose Alejo, former USBA champion Mike Arnaoutis, and highly-rated contender Emmanuel Taylor,  Algieri, stepped up in his HBO debut and challenged WBO junior welterweight champion “The Siberian Rocky”  Ruslan Provodnikov  on June 14   Despite suffering two knockdowns in the first round which closed his swollen right eye, Algieri who entered the fight as a 5-1 underdog, eschewed the natural instinct to panic and resolutely stuck to his game plan, expertly using his jab and supreme athletic ability to pick apart the defending champion to claim a split decision victory and the world title. The live, first-time airing of the fight averaged over 1.1 million viewers placing among the five most-viewed fights on cable this year. In what could be a first for any professional boxer, Algieri used his purse from the Provodnikov bout to pay off his student loans.  He aspires to attend medical school after he concludes his boxing career.

Fighter of the Decade and Filipino icon Congressman 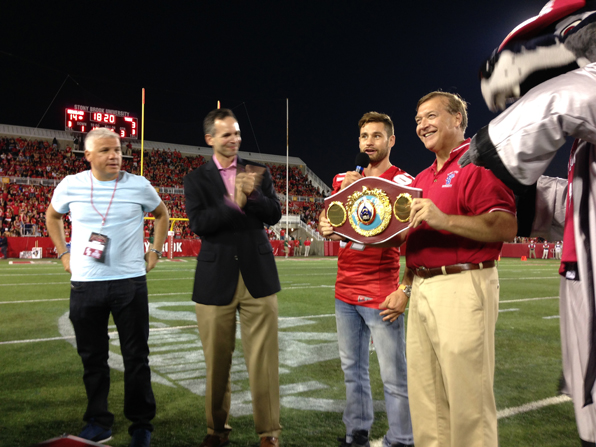