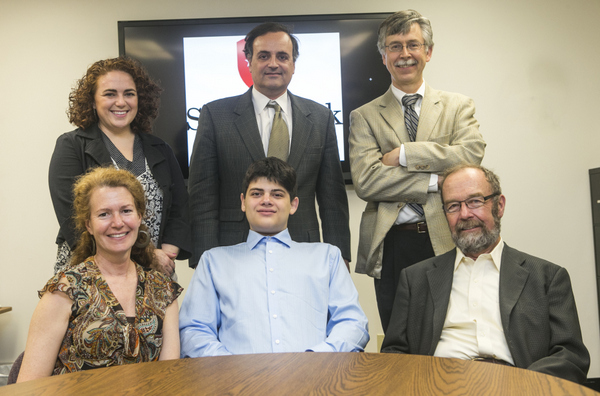 At Stony Brook University, intellectual excitement is an infectious condition, but it’s something faculty like to spread, not contain. That’s why professors Lori Repetti and Yejin Choi recently established SBU as one of the sites for the National Science Foundation-sponsored North American Computational Linguistics Olympiad (NACLO)—a competition for US and Canadian middle and high school students—and inspired 37 students to take a qualifying exam.

“We are continually on the lookout for ways to attract talent to Stony Brook University, as well as opportunities to work with the Long Island community,” says Dennis N. Assanis, Stony Brook Provost and Senior Vice President for Academic Affairs. “NACLO is an ideal vehicle to do this, and will definitely be back next year.”

NACLO involves a series of challenging and fun puzzles in computational linguistics that students solve during a three-hour test. No knowledge of linguistics or computing is required; the puzzles can be solved by analytic reasoning and problem-solving skills. The Open Round was held on January 30 at the Center for Science and Mathematics Education (CESAME), an interdisciplinary STEM education center on campus that hosts a range of academic year and summer activities for faculty, graduate students, undergraduates, and K-12 students and teachers.

One student, Brandon Epstein—a sophomore at Half Hollow Hills High School in Dix Hills, on Long Island—did exceptionally well. He advanced through the Open Round, and then placed fifth in the United States at the Invitational Round—also held at Stony Brook,—tackling problems from Turkish, Hungarian, Kiswahili, the Tangkhulic family of languages, Tok Pisin, and Yidiny, as well as problems dealing with computational tools like finite state transducers and combinatorial categorial grammars.

With that finish, Epstein became one of eight students selected for two US teams going to the twelfth International Linguistics Olympiad (IOL) in Beijing, China, on July 21-25, 2014.

“Brandon is a very enthusiastic young man who loves languages and solving puzzles,” says Repetti. “We are very proud of him, and pleased to have been able to provide him with an opportunity to use his skills in a forum such as NACLO.”

Epstein and the other students were mentored by faculty from multiple SBU departments. Repetti is the Director of Undergraduate Studies in the Linguistics Department; she studies the history and phonology of the Romance languages, in particular Italian and Italian dialects. Choi, an Assistant Professor in the
Computer Science Department, researches statistical approaches and computational models for Natural Language Processing and Computational Linguistics.

The training consisted of three parts—an overview of the field of Linguistics, presented by Mark Aronoff, Distinguished Professor in the Department of Linguistics; an introduction to the field of Computational Linguistics, by Yejin Choi; and a session on problem solving strategies, using sample questions from previous tests, which was run by Lori Repetti.

“The faculty at Stony Brook went over previous NACLO problems to give us an overall feel of what we had to do, and also reviewed our knowledge of concepts in linguistics such as phonology,” Epstein says. “They were careful to make sure that we understood what was being discussed, and got us involved in what we were learning. We learned about the applications of linguistic concepts to other systems that work similarly to languages, as well as the differences between English and other languages with respect to writing systems and word formation.”

Kristen La Magna, MAT (Master of Arts in Teaching), an Education Specialist & Laboratory Manager in the SBU Biotechnology Teaching Laboratory, helped organize Stony Brook as the NACLO test site. “This is only the second year that CESAME has been involved with NACLO, and I am really happy that we have been able to recruit students who are performing at such a high level,” she says. “In addition, it is always great for the university when high school students can come and participate in something on campus. Many students don’t realize how many opportunities are available at a university so close to home. We look forward to our continued involvement, and ongoing success, with the NACLO program.”

Judging from Epstein’s enthusiasm, demand should be brisk. “I enjoy that computational linguistics blends together two topics I love and am familiar with, mathematics and linguistics,” the young man says. “It is incredibly fun and very helpful to my linguistic studies.”

The Long Island student is psyched for the contest. “Now that I’m on the international team for the IOL in Beijing, I feel very excited. I have corresponded with the other team members in the USA as well as Canada, and three coaches are preparing us on a weekly basis for for the competition in July. Personally, I think the IOL is great, and I can’t wait to compete in it.”