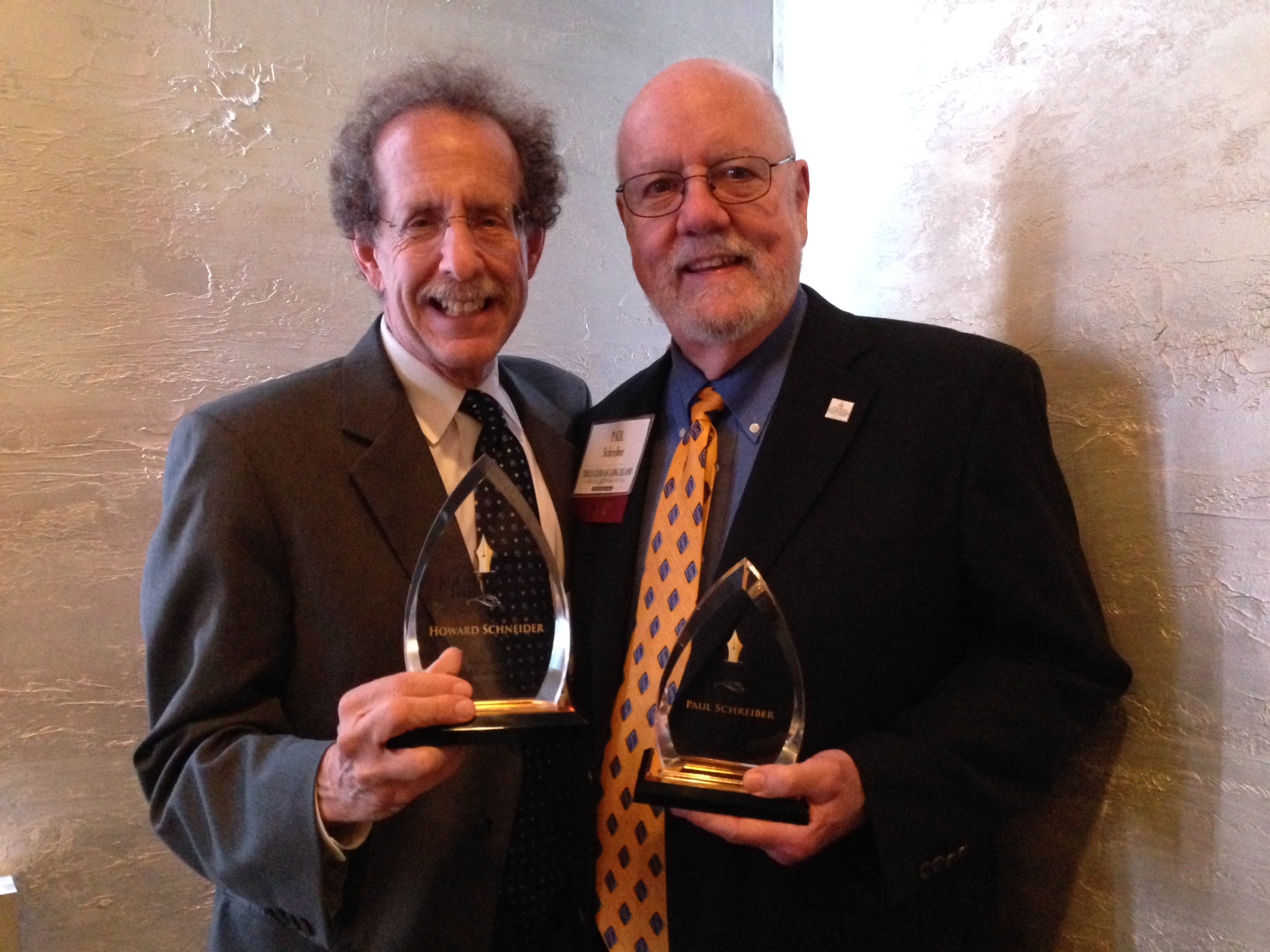 STONY BROOK, NY, June 20, 2014 – Stony Brook School of Journalism Dean Howard Schneider and Undergraduate Director Paul Schreiber were tapped by the Press Club of Long Island (PCLI) as inaugural “Hall of Fame” inductees this week. The PCLI, which celebrated its 40th anniversary this month, is a chapter of the Society of Professional Journalists.

PCLI established its new Hall of Fame this year to recognize 25 trailblazing journalists and media organization owners, living and deceased, who have produced and promoted the highest level of journalism based on Long Island and shown leadership in the industry.  It is an “evolution of PCLI’s annual lifetime achievement award and was created to celebrate the accomplishments  and achievements of journalists,” according to the organization.

“Howie and Paul were extraordinary journalists prior to joining Stony Brook University. They deserve this honor, and we are fortunate to have them at the helm of SUNY’s first and only School of Journalism,” said Dennis N. Assanis, Provost and Senior Vice President for Academic Affairs at Stony Brook University. “Their vision, real-world experience, energy and enthusiasm have enabled the School of Journalism to grow immensely over the past eight years, and it’s no surprise that their good work has brought national acclaim to the Stony Brook campus.”

After leaving Newsday as its editor in 2004 after 35 years at the paper, Schneider was invited by then-president Shirley Strum Kenny to study the possibility of launching a journalism major at Stony Brook. The journalism major and the School of Journalism, the only such school in the SUNY system, were approved in 2006, with Schneider as founding dean.

Paul Schreiber, who took a buyout from Newsday in 2002 after 33 years at the paper, returned to Stony Brook in 2004 as director of the journalism minor. He became the SOJ’s undergraduate director when the school was approved.

Following Schneider’s strategic plan, they developed its comprehensive multi-media curriculum and its Center for News Literacy, the pioneering program that enables students to use critical thinking skills to judge the reliability and credibility of news reports from all media, including the Web. That program has since spread to dozens of other universities in North America and overseas.

More recently, the school has added the Alan Alda Center for Communicating Science, the Marie Colvin Center for International Reporting and a Master of Science degree in journalism.

Now in its eighth year, the Stony Brook School of Journalism has an enrollment of approximately 250 undergraduate majors and minors, and more than 220 alumni, many of whom are working in all facets of journalism.