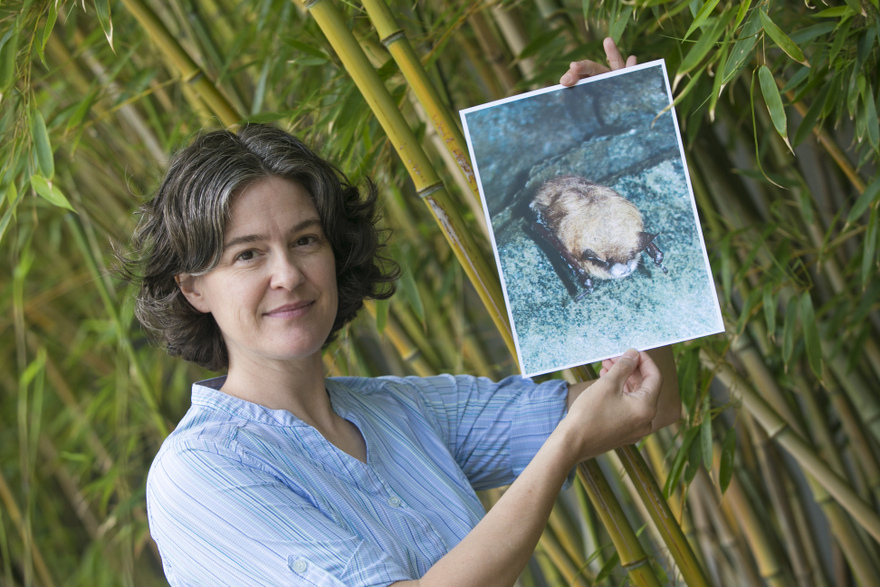 STONY BROOK, NY, June 19, 2014 –
Marianne Moore, in the Department of Ecology and Evolution in the College of Arts and Sciences at Stony Brook University, received a $318,455 grant from the U.S. Fish and Wildlife Service to study skin immune proteins as predictors of resistance against white-nose syndrome (WNS) with her colleagues Dr. Liliana Dávalos (SBU) and Dr. Amy Russell (Grand Valley State University, MI). WNS is a fungal infection that has killed millions of hibernating bats in eastern North America since it was first documented in New York in the winter of 2006-2007. It threatens at least two species with extinction.

The U.S. Fish and Wildlife Service announced this week that it had issued $1.8 million in grants for the research and management of WNS. In addition to the Stony Brook award, funding was granted to seven other projects at universities in New Hampshire, Pennsylvania, Ohio, Michigan and Wisconsin. Projects include studies to better understand bat immune responses to WNS, investigations into methods to control the disease, and ways to examine the molecular infrastructure of the fungus that causes WNS (Pseudogymnoascus destructans), and other cave-dwelling fungi.

Dr. Moore is an ecophysiologist studying the immunology of bats. She earned her B.S. at the Evergreen State College and her Ph.D. in Ecology, Behavior and Evolution at Boston University under the mentorship of Dr. Tom Kunz. Her early graduate work focused on the ecology of rabies and the effects of mercury contamination on the immune systems of North American bats. In 2008, her Ph.D. research took an unanticipated detour when she was called to investigate WNS. Ultimately, her Ph.D. was based on a large field-based study describing the immune responses of little brown myotis affected by WNS. During an initial postdoc with Dr. DeeAnn Reeder at Bucknell University, she experimentally tested species-specific differences in immune responses to the WNS fungal pathogen. She is now using next generation sequencing under the mentorship of Dr. Liliana Dávalos to describe the diversity and evolution of immune system genes that may code for proteins conferring resistance to WNS. The most important potential outcome of her work may be the development of a safe and effective treatment that is based on compounds naturally produced by bats.

Dr. Moore is supported by an NIH-funded IRACDA NY-CAPS (New York Consortium for the Advancement of Postdoctoral Scholars) fellowship issued through the Center for Inclusive Education (PI Dr. Jorge Benach) at Stony Brook University. The NY-CAPS program provides post docs in the biological sciences advancement in teaching skills and research experiences during a three-year mentored fellowship at Stony Brook University and emphasizes the involvement of under-represented minorities in STEM fields.

“Our project will help uncover why some bats succumb to WNS and show extreme mortality, while others are thriving despite exposure to the fungal pathogen. It will also test anti-fungal proteins naturally produced by bats as a method for controlling WNS,” said Dr. Moore. “For the bats, there is no time to lose, and the loss of bats will affect us because they are voracious consumers of agricultural pest insects and insects that may transmit diseases to humans. Fortunately, we now have powerful methods to identify all proteins in a tiny tissue sample, which can be safely collected even from endangered species living in the WNS-affected region.”

“Bats are fascinating animals that are vital for a healthy environment. We are hopeful that these investments into research will get us closer to getting the upper hand on this devastating disease,” said Wendi Weber, co-chair of the White-Nose Syndrome Executive Committee and Service Northeast Regional Director.

Since 2008, the U.S. Fish and Wildlife Service has granted more than $17.5 million to institutions and federal and state agencies for WNS research and response. This year’s grants are the second round of WNS research funding awarded by the Service. $1.4 million was awarded to federal agencies that provided matching funds for research and response to the disease. Another $1.5 million is currently available for state wildlife agencies on www.grants.gov.

“Scientists from around the world are working together to understand this disease, and to develop the tools to manage WNS and conserve our native bats,” said Dr. Jeremy Coleman, the Service’s national WNS coordinator. “Findings from past research have led to improved methods for detecting P. destructans; development of potential tools to slow disease spread and treat infected bats, and the development of a national bat population monitoring program.”

Funding for the grants was provided through the Service’s Endangered Species Recovery and Science Applications programs.