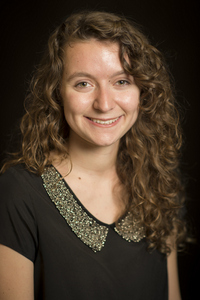 Campione, 19, is traveling on a month-long reporting trip to China through the SBU School of Journalism’s Marie Colvin Center “Journalism Without Walls” program. She will be reporting, writing and shooting video to help produce stories for publication on the student journalism website. The $2500 travel fellowship will help cover her tuition and expenses.

“I aspire to learn about the world through the eyes of a journalist,” said Campione, a native of Middle Village, Queens. “I believe that spending time in China will broaden my perspective and enhance my ability to report with a passion that can only be acquired through travel.”

The Michael Rosenbaum Memorial Scholarship was established in honor of the Emmy-winning CBS news producer through the generous support of his friends and family. Rosenbaum had an illustrious 27-year career at CBS, producing for CBS News, 60 Minutes and 60 Minutes II. He served as Tel Aviv bureau chief during the First Palestinian Intifada, collaborating with correspondents Dan Rather and Bob Simon. His field producing during the assassination of Israeli Prime Minister Yitzhak Rabin in 1995 led to the Peabody award and two Emmy awards. He died of a brain tumor in May of 2012 at the age of 64.

“Michael’s time spent reporting abroad wasn’t just part of his job; it shaped him as a unique kind of storyteller with an important sense of the interconnectedness of our world,” said Abby Witt, Michael’s niece who was part of the scholarship selection committee. “We’re excited to contribute to ensuring the next generation of journalists, like Francesca, will get a taste of what fueled his passion.”

“I am inspired by someone who had such an illustrious career,” said Campione. “I hope to achieve the same journalistic integrity and quality in his memory.” 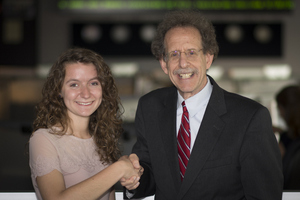 The scholarship was established to support student journalists who participate in the Marie Colvin Center’s “Journalism Without Walls” program, which takes undergraduates and graduates overseas to report, write and produce print and multimedia journalism. The program has already sent student journalists to Russia, Cuba, Kenya and Turkey. The scholarship was endowed after a special match grant from Jim and Marilyn Simon and the Simons Foundation to exist in perpetuity.

Campione is a graduate of the Frank Sinatra School of the Arts in Astoria. She loves art, philosophy and literature, and from an early age showed a proclivity towards writing. She currently covers Arts and Entertainment for the Stony Brook Statesman, the largest on-campus newspaper. She said that, until this opportunity, her overseas experience was limited to family vacations to the Caribbean and Puerto Rico. “China will be an exciting and exhilarating change,” she said.

Campione’s parents said they are proud that she is reaching for such tremendous goals as a freshman and are impressed with how motivated, ambitious and confident she has become in pursing her interests. “We are very excited that Francesca has this wonderful opportunity to broaden her perspective of the world,” said Linda Campione on behalf of herself and husband John. “We are confident that she will use it to enhance her skills in pursuit of a rewarding and successful career in journalism.”

Dean Howard Schneider believes providing students with an overseas reporting experience is a key element in making Stony Brook different from other journalism programs. “The students who return from our overseas trips say the experience is transformative, not only in terms of their journalism skills, but in what it does for them as people,” he said. “Many of our students wouldn’t get the opportunity otherwise. The Rosenbaum scholarship is a very generous and valuable boost to our efforts.”