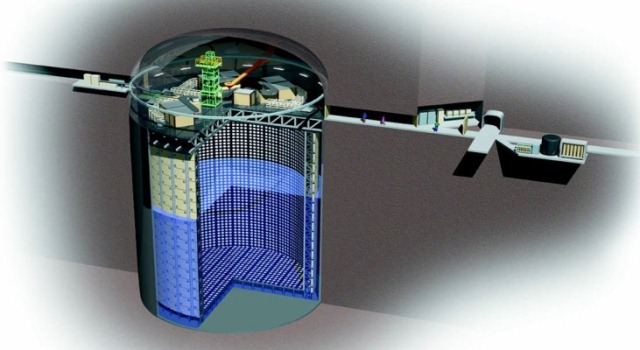 STONY BROOK, NY, Embargoed until 8:30 am EST on Friday July 19, 2013 – Today at the European Physical Society meeting in Stockholm, the international T2K collaboration announced definitive observation of muon neutrino to electron neutrino transformation.  In 2011, the collaboration announced the first indication of this process, a new type of neutrino oscillation, then; now with 3.5 times more data this transformation is firmly established.  The probability that random statistical fluctuations alone would produce the observed excess of electron neutrinos is less than one in a trillion.  Equivalently the new results exclude such possibility at 7.5 sigma level of significance. This T2K observation is the first of its kind in that an explicit appearance of a unique flavor of neutrino at a detection point is unequivocally observed from a different flavor of neutrino at its production point.

In the T2K experiment in Japan, a muon neutrino beam is produced in the Japan Proton Accelerator Research Complex, called J-PARC, located in Tokai village, Ibaraki prefecture, on the east coast of Japan.  The neutrino beam is monitored by a detector complex in Tokai and aimed at the gigantic Super-Kamiokande underground detector in Kamioka, near the west coast of Japan, 295 km (185 miles) away from Tokai. An analysis of the data from the Super-Kamiokande detector associated with the neutrino beam time from J-PARC reveals that there are more electron neutrinos (a total of 28 events) than would be expected (4.6 events) without this new process.

Neutrino oscillation is a manifestation of a long range quantum mechanical interference. Observation of this new type of neutrino oscillation leads the way to new studies of charge-parity (CP) violation which provides a distinction in physical processes involving matter and antimatter.  This phenomenon has only been observed in quarks (for which Nobel prizes were awarded in 1980 and 2008). CP violation in neutrinos in the very early universe may be the reason that the observable universe today is dominated by matter and no significant antimatter, which is one of the most profound mysteries in science. Now with T2K firmly establishing this form of neutrino oscillation that is sensitive to CP violation, a search for CP violation in neutrinos becomes a major scientific quest in the coming years, and T2K will continue to play a leading role. The T2K experiment expects to collect 10 times more data in the near future, including data with antineutrino beam for studies of CP violation in neutrinos.

The T2K experiment was constructed and is operated by an international collaboration. The current T2K collaboration consists of over 400 physicists from 59 institutions in 11 countries [Canada, France, Germany, Italy, Japan, Poland, Russia, Switzerland, Spain, UK and US].  The experiment is primarily supported by the Japanese Ministry of Education, Culture, Sports, Science and Technology (MEXT). Additional support is provided by the following funding agencies from participating countries: NSERC, NRC and CFI, Canada; CEA and CNRS/IN2P3, France; DFG, Germany; INFN, Italy; Ministry of Science and Higher Education, Poland; RAS, RFBR and the Ministry of Education and Science of the Russian Federation; MICINN and CPAN, Spain; SNSF and SER, Switzerland; STFC, U.K.; DOE, U.S.A.

The US T2K collaborating team of approximately 70 members [Boston University, UC Irvine, University of Colorado, Colorado State University, Duke University, Louisiana State University, Stony Brook University, University of Pittsburgh, University of Rochester, and University of Washington (Seattle)] is funded by the US Department of Energy, Office of Science. The US groups have built super-conducting corrector magnets, proton beam monitor electronics, the second neutrino horn and a GPS time synchronization system for the T2K neutrino beamline; and a pi-zero detector and a side muon range detector (partial detector) in the T2K near detector complex. They are also part of the team that built, upgraded and operates the Super-Kamiokande detector.

This discovery was made possible with the unyielding and tireless effort by the J-PARC staff members and the management to deliver high quality beam to T2K after the devastating March 2011 earthquake in eastern Japan which caused severe damage to the accelerator complex at J-PARC, and abruptly discontinued the data-taking run of the T2K experiment.

“In 1998, the discovery of neutrino oscillation in the atmospheric neutrinos by the Super-Kamiokande experiment led us to a new journey into the fascinating and mysterious world of neutrinos which is full of surprises,” said Chang Kee Jung, Professor of Physics at Stony Brook University, and International Co-Spokesperson, T2K Collaboration. “This discovery of electron neutrino appearance from muon neutrinos by the T2K experiment opens another critical door in our journey to unveil the secrets of our universe. I feel extremely lucky and ecstatic to be involved in both of these discoveries. I am confident that the CP violation in neutrinos will be eventually discovered in this journey.”

Editor’s Note: More detailed information on this announcement including images, T2K experiment and T2K collaboration can be found from the T2K public webpage.


The T2K experiment
T2K means “Tokai to Kamioka”, and it is a long-baseline neutrino experiment. It produces a muon-neutrino beam at the J-PARC proton accelerator in Tokai, and sends it to the far detector Super Kamiokande, which is located at a distance of 295 km in Kamioka mine, Gifu Prefecture. One of the main aims of T2K is to ﬁnd oscillations from muon neutrinos to electron neutrinos, and this announcement is to conﬁrm that these oscillations have been observed. T2K is an international collaboration with about 500 reserachers from 11 countries: Japan, U.S., U.K., Italy, Canada, Switzerland, Spain, Germany, France, Poland and Russia. In Japan, 85 researchers and students participate as core members of T2K; they are from the Osaka City University, Okoyama University, Kyoto University, KEK, Kobe University, Tokyo Metropolitan University, University of Tokyo, Institute for Cosmic Ray Research of the University of Tokyo, Kavli IMPU of the University of Tokyo, and Miyagi University of Education.

Neutrinos are elementary particles that come in three types: electron neutrinos, muon neutrinos and tau neutrinos. They are electrically neutral, and their masses are not known but are believed to be of the order of one millionth of the masses of quarks and electrons.

Neutrinos change from one type to another as they travel. This change of type is called “neutrino oscillation”, and it can only happen if neutrinos have different masses. It was ﬁrst predicted by Pontecorvo, Maki, Nakagawa and Sakata in 1962. Oscillations can take place between any of the three types of neutrino and any other type.

CP means “Charge-Parity”, where a “Charge” transformation changes a particle to its antiparticle, and a “Parity” transformation changes the handedness of the particle. A “Charge-Parity” or CP transformation changes a left-handed neutrino to a right-handed antineutrino or vice versa. A right-handed particle has its spin vector pointing in the same direction as its motion, whereas a left-handed particle has its spin vector pointing in the opposite direction to its motion. “CP violation” means that the laws of physics change when a CP transformation is made. An example of CP violation would be the probability of oscillation from muon neutrinos to electron neutrinos being different from the probability of oscillation from muon antineutrinos to electron antineutrinos. A search for CP violation is very important as it could explain why the Universe is composed entirely of matter when equal quantities of matter and antimatter were created in the Big Bang.