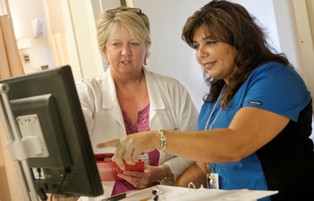 For the fourth consecutive year, Stony Brook University Hospital has been recognized as one of the nation’s Most Wired hospitals. The award comes just as SBUH has successfully implemented the next phase of its Electronic Patient Record (EPR), a new computerized clinical documentation system for nurses, physicians and ancillary departments. The system will improve patient safety and care through improved documentation and by providing a better electronic “view” of the patient’s care over time.


STONY BROOK, N.Y. – July 24, 2012 – For the fourth consecutive year, Stony Brook University Hospital has been recognized as one of the nation’s Most Wired hospitals, according to the results of the 2012 Most Wired Survey released in the July issue of Hospitals & Health Networks magazine. Stony Brook is one of only 12 New York hospitals to be recognized as among the nation’s most wired.

The Most Wired survey is conducted annually by the magazine in cooperation with McKesson Corporation, HIT Exchange, the College of Healthcare Information Management Executives (CHIME), and the American Hospital Association (AHA). The 2012 survey, which was conducted between Jan. 15 and March 15, asked hospitals and health systems nationwide to answer questions regarding their IT initiatives. A total of 662 surveys were completed, representing 1,570 hospitals, or roughly 27 percent of all U.S. hospitals.

“This award represents a total team approach to promote high-quality care for our patients through the use of technology,” said Fred Sganga, Interim Chief Executive Officer for SBUH. “It also represents a significant investment in technological innovation at Stony Brook to create a more integrated and comprehensive computer system for clinical care and documentation.”

The award comes just as SBUH has successfully implemented the next phase of its Electronic Patient Record (EPR), said Jane Tsui-Wu, Interim Chief Information Officer for SBUH. On July 9, the hospital implemented a new computerized clinical documentation system for nurses, physicians and ancillary departments that will improve patient safety by improving documentation and providing a better “view” of the patient’s care over time through the EPR, she said. Respiratory Therapy also began using barcode technology to administer medications.

The nation’s Most Wired hospitals are leveraging the adoption and use of health information technology (IT) to improve performance in a number of areas, according to the survey results. As a field, hospitals are focused on expanding and adopting IT that protects patient data, and optimizes patient flow and communications.

Among the key findings this year:

Of note, social media is catching on among the Most Wired hospitals for crisis communications, as nearly one half use social media for this purpose, compared to only one third of all surveyed hospitals. More than 25 percent offer care management messages and chats with physicians.

“As shown by these survey results, hospitals continue to demonstrate how IT not only can be used to improve patient care and safety but it is also a means to improve efficiency,” says Rich Umbdenstock, president and CEO of the AHA. “Hospitals receiving Most Wired recognition are truly representative of our nation’s hospitals and systems – rural and urban, small and large, teaching and non-teaching, and critical access hospitals geographically dispersed.”

The July H&HN cover story detailing the 2012 survey results is available at www.hhnmag.com.

The American Hospital Association (AHA) is the national organization that represents and serves all types of hospitals, health care networks, and their patients and communities. Close to 5,000 hospitals, health care systems, networks, other providers of care and 40,000 individual members come together to form the AHA.  Founded in 1898, the AHA provides education for health care leaders and is a source of information on health care issues and trends.  For more information, visit the AHA website at www.aha.org.

About the Most Wired Survey

The 2012 Most Wired Survey is conducted in cooperation with McKesson Corporation, the College of Healthcare Information Management Executives (CHIME), and the American Hospital Association.