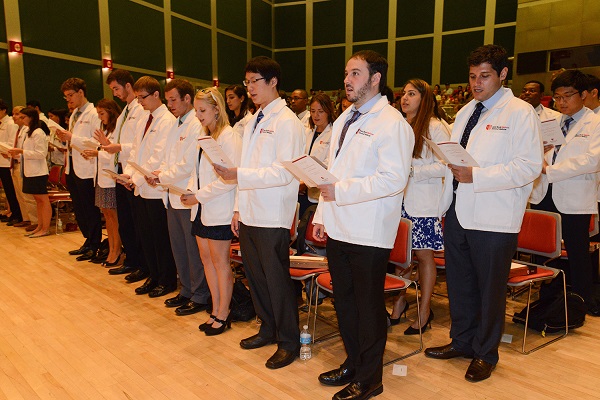 White Coat Ceremony launches medical school for first-year students from New York, eight other states and from around the world

The 132 first-year students of the Stony Brook University School of Medicine Class of 2019 — the largest ever in the school’s history — officially began their training with the School’s annual White Coat Ceremony. At the August 23 event, the incoming medical students received their first physician-in-training white coat and took the Hippocratic Oath for the first time.

The Class of 2019 is a talented and diverse group coming from New York State, eight other states, and from around the world. Only 7.4% of the total 5,255 applicants were accepted. A larger portion of students in this class compared to previous incoming classes already have advanced degrees. Twenty-three hold advanced degrees including one PhD, one Doctor of Pharmacy, 18 Masters and three Masters in Public Health. For more statistical information about the class, see this infographic: 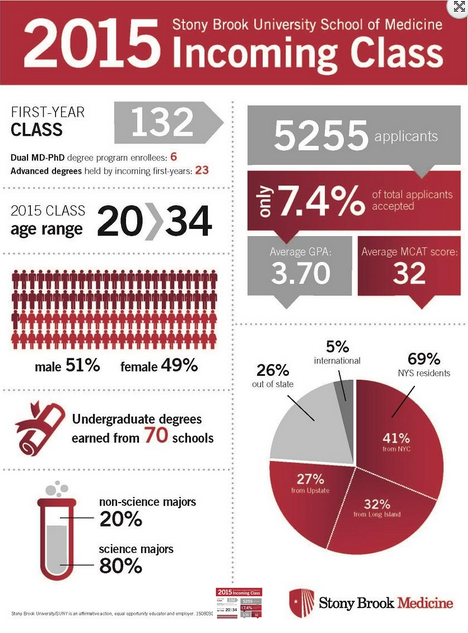 Tony Wan, the son of Chinese immigrants, Tony enlisted in the U.S. Marine Corps right after high school. He served two tours in Iraq – where his duties included providing first-aid to fellow soldiers. He then left the military and pursued college at CUNY-York College, where he graduated as class valedictorian in 2012. After seeing too many of his fellow Marines with life-changing injuries, he’s motivated towards becoming a neurologist specializing in traumatic brain injuries. Tony particularly wants to work to improve the care of veterans.

Among the many accomplished members of the Class of 2019 include: “Today is a celebratory and symbolic day for all of you. As you receive your first white coats, enjoy the honor and responsibility that comes with wearing the white coat,” said Kenneth Kaushansky, MD, MACP, Senior Vice President for the Health Sciences and Dean of the School of Medicine. “Medicine is a field unmatched in the range of emotions you will experience. You will be struck by many firsts – your first newborn delivery, your first sharing of a diagnosis of cancer, the first patient you will see cured, and your first patient death. And never forget that your journey will require life-long learning, as you take part in many advances in the art and the science of medicine in the years to come.”

Persis Puello, a mother of two and the oldest incoming student at 34 years of age. She holds advanced degrees from Columbia University (MS in Applied Physiology and Nutrition) and from Stony Brook (MS in Physiology and Biophysics). Her career as an athletic trainer and nutritionist inspired her to further her career in sports medicine by working towards becoming an orthopedic surgeon and eventually a team doctor. She credits support from her husband and her sister for enabling her to raise her two young children (ages 3 and 8) while pursing the challenge of a career in medicine.

Nicholas Tsouris, who grew up in Stony Brook and is a former professional lacrosse player. While attending Yale, he and a team of fellow students were hailed by Popular Mechanics magazine as “Backyard Geniuses” for their invention of a spoke-less bicycle. After graduating from Yale, he worked on Wall Street while playing major league lacrosse, later deciding to pursue medicine.

The School has steadily increased its incoming class size over the past several years in order to address the significant shortage of physicians nationally, as cited by the Association of American Medical Colleges.

New to the ceremony this year was the presentation of a stethoscope for each student accompanied with their white coat. The School’s alumni donated the 132 stethoscopes for the event.