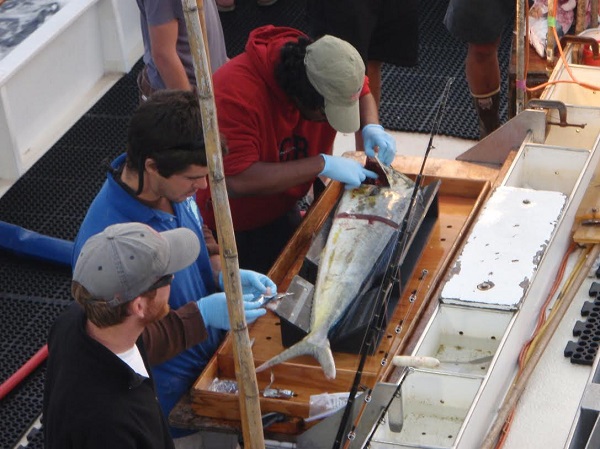 Stony Brook, NY – June 23, 2015 – Scientists have commonly thought that fish which evolved to become endothermic, or warm-blooded, may allow them to be more active in colder waters and thus exploit more food sources. But a new study published in the
Proceedings of the National Academy of Sciences (PNAS) by Daniel Madigan, PhD, a Stony Brook University marine biologist, and colleagues nationally, reveals that this is not the case and that combined effects of overfishing and environmental changes can impact the performance of these fish.

The ability to “warm” has evolved in some fish and sharks, including certain species of tuna,  and many of these species have been extremely successful for millennia in ocean waters worldwide. In the paper “Assessing niche width of endothermic fish from genes to ecosystem,” the common theory that body warmth allows tunas to be more active predators, and thus better able to exploit many high quality food sources by swimming into cooler waters was tested by Dr. Madigan and colleagues. They assessed three species of tuna with varying levels of endothermy (yellowfin, albacore, and Pacific bluefin tunas).

“What we discovered is that what worked well for millions of years – pelagic fish ‘warming’ their bodies enabling them to reap energetic benefits by expanding their foraging into much cooler waters – may not work as well now that humans have significantly altered the marine environment,” said lead author Dr. Madigan, an NSF Post-Doctoral Fellow in the School of Marine and Atmospheric Sciences (SoMAS) at Stony Brook University.

Dr. Madigan said a strong example of this pattern in the fish studied is the Pacific bluefin tuna, which has a greater cold tolerance than other tuna species and inhabits a broader range and depth than other tunas. In fact, bluefins have the highest cold tolerance of all tuna species. Because of this, one would expect the Pacific buefin tuna would forage most successfully, but the team found the opposite.

“We found evidence that the Pacific bluefin tuna specialized on sardines and does not extensively exploit fish found in colder waters, and yellowfin tuna consumed more calories by being less selective,” said Dr. Madigan. “This makes us question what happens to Pacific bluefin when populations of sardines decrease due to both regional overfishing and natural fluctuations in sardine populations. The bluefin’s adaptation as a ‘warm fish,’ which can be a strength, then becomes a weakness and may significantly affect things like growth and overall fitness.”

He pointed out that previous studies have documented human overfishing of “forage fish,” which includes sardines, anchovy and herring. Many of these forage fish are used to feed aquacultured fishes for human consumption and are also eaten by oceanic predators such as tunas, sharks, seabirds, and marine mammals.

The research team used several scientific methods to classify the endothermic capacity of the tuna species, characterize their diving behavior, and determine the food resources they ingested.

They used cardiac gene expression data from the heart tissue of each species. This provided a measurable index revealing how well their hearts could perform in cold water, essentially defining their ability to access deep water.  They placed electronic tags on fish that can record data for a year or more, which tracked the distance and depth of their swimming. This revealed that bluefin spend more time in deep and colder waters. They also performed diet analyses from hundreds of samples of the three tuna species caught from 2008 to 2010 in waters off Southern California and Northern Mexico. This revealed the specialization of diet for bluefin and the more varied diet of the other species.

Dr. Madigan said their analysis suggests that some marine predators and endothermic fish, such as the bluefin, may rely on more specific diet items than scientists were previously aware. He added that the next step in the research is to understand in a more concrete way just how such predators are impacted by both scarcity and abundance of their prey (the forage fish).

The research was supported in part by the Office of Naval Research, and from the Gordon and Betty Moore, David and Lucille Packard, and Alfred P. Sloan Foundations.