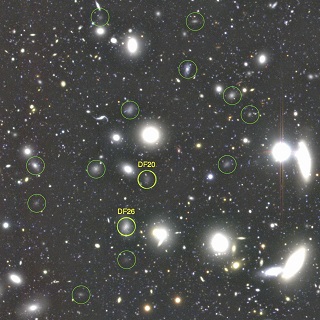 Led by Stony Brook’s Jin Koda, PhD, the discovery surpasses the 2014 find by more than 800

STONY BROOK, NY, June 22, 2015 – A team of researchers from Stony Brook University and the National Astronomical Observatory of Japan (NAOJ) have discovered 854 “ultra-dark galaxies” in the Coma Cluster by analyzing data from the 8.2-meter Subaru Telescope. The new discovery, published in the June 2015 edition of the Astrophysical Journal Letters, surpasses the 2014 discovery of 47 mysterious dark galaxies by more than 800 and suggests that galaxy clusters are the key environment for the evolution of these mysterious dark galaxies.

“The findings suggests that these galaxies appear very diffuse and are very likely enveloped by something very massive, “said Jin Koda, PhD, principal investigator of the study and Associate Professor in the Department of Physics and Astronomy at Stony Brook University. The ultra-dark galaxies are similar in size to the Milky Way, but have only 1/1,000 of stars that our galaxy does (Figure 1.) The stellar population within such fluffy extended galaxies is subject to rapid disruption due to a strong tidal force detected within the cluster. “We believe that something invisible must be protecting the fragile star systems of these galaxies, something with a high mass,” said Dr. Koda. “That ‘something’ is very likely an excessive amount of dark matter.” The component of visible matter, such as stars, is calculated to contribute only one percent or less to the total mass of each galaxy. The rest – dark matter – accounts for more than 99 percent.

The Subaru Telescope revealed that these dark galaxies contain old stellar populations and shows a spatial distribution similar to those of other brighter galaxies in the Coma Cluster (Figure 2).  It suggests that there has been a long-lived population of galaxies within the cluster and the amount of visible matter they contain, less than one percent, is extremely low compared to the average fraction within the universe.

These galaxies are dark because they have lost gas needed to create new stars during, or after, their largely unknown formation process billions of years ago. From their preferential presence within the cluster, it’s likely that the cluster environment played a key role in the loss of gas, which affects star formation within the galaxy. Several loss mechanisms are possible, including ram-pressure stripping by intra-cluster gas, gravitational interactions with other galaxies within the cluster, and gas outflows due to simultaneous supernova explosions triggered by the ram pressure or gravitational encounters.

Dark matter is one of the unresolved mysteries in Cosmology. Studies of such interplay between dark matter and stars and gas in galaxies are increasingly attracting attention from researchers. “This discovery of dark galaxies may be the tip of the iceberg,” said Dr. Koda. “We may find more if we look for fainter galaxies embedded in a large amount of dark matter,  with the Subaru Telescope and additional observations may expose this hidden side of the Universe.”

Editor’s Note: Last year, Stony Brook started cluster faculty hires in the field of Cosmology in partnership with the Brookhaven National Laboratory (BNL). This initiative capitalizes on the new development of the upcoming Large Synoptic Survey Telescope (LSST) whose camera is being constructed at BNL. The team of researchers at Stony Brook University, including upcoming new faculty members, will continue to research dark matter, dark energy, and galaxy formation and evolution.