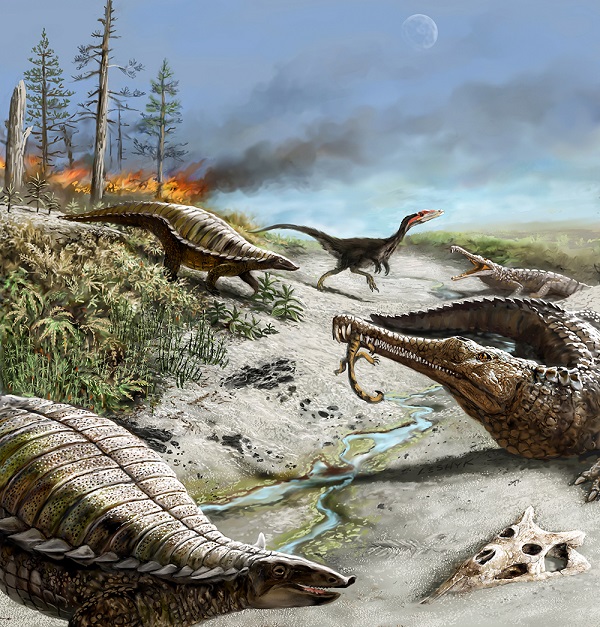 STONY BROOK, N.Y., June 16, 2015 – Climate and plant community instability may have hampered the success of dinosaurs in the tropics during the Late Triassic Period (235-201 million years ago), according to a study published in the
Proceedings of the National Academy of Sciences
(PNAS). This finding was reached by co-author Alan H. Turner, PhD, of Stony Brook University, and an international team of scientists by examining the sedimentary rocks and fossil record preserved in the Chinle Formation in northern New Mexico to investigate the environment in tropical latitudes during the Late Triassic.

The results detailed in the paper, titled “Extreme ecosystem instability suppressed tropical dinosaur dominance for 30 million years,” suggest that the fluctuations, associated with high atmospheric carbon dioxide, may have prevented the establishment of a diverse community of fast-growing, warm-blooded, large dinosaurs such as sauropods and their close relatives. These dinosaurs likely require a productive and stable environment to thrive, conditions not present in equatorial North America until the beginning of the Jurassic Period around 200 million years ago.

The team examined rocks and fossils that come from a location known as Ghost Ranch, an area noteworthy for a number of Triassic dinosaur discoveries including the early meat-eating dinosaurs Coelophysis and Tawa. The rocks at Ghost Ranch were deposited by rivers and streams between 205-215 million years ago at a time when this area was much closer to the equator. During the Late Triassic northern New Mexico was at a latitude comparable to the southernmost tip of India today.

For the past nine years, Dr. Turner has co-led a team of paleontologists and geologists to these rocks as part of an ongoing project to document the ecological and evolutionary changes taking place during this important point in earth’s history.

“By focusing so much effort at a single region like Ghost Ranch, we’ve made one of the largest and most detailed collections of Late Triassic fossil vertebrates in North America”, said Dr. Turner, an Associate Professor in the Department of Anatomical Sciences at Stony Brook. “Additionally, our team was able to provide the first detailed paleoenvironmental analysis for rocks that produce early dinosaur fossils.”

Lead author, Dr. Jessica Whiteside, a geochemist from the University of Southampton, UK, found that wild climate swings correspond to changes in plant community structure, from a seed fern-dominated system to a conifer-dominated system, and that individual plant groups repeatedly alternated from rare to common through time.

“The conditions would have been something similar to the arid western United States today, although there would have been trees and smaller plants near streams and rivers and forests during humid times,” explained Dr. Whiteside. “The fluctuating and harsh climate with widespread wild fires meant that only small two-legged carnivorous dinosaurs, such as Coelophysis, could survive.”

Fieldwork was conducted with the permission and support of the Ghost Ranch Conference Center.