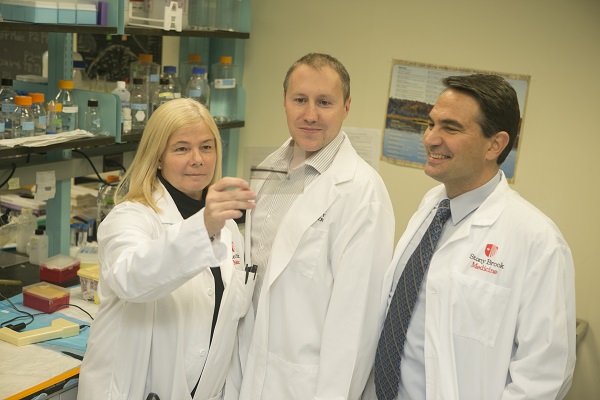 Stony Brook, NY, June 15, 2015 – Stony Brook University has entered into a licensing agreement with a startup company, CadheRx Therapeutics, to develop and market an anti-cancer technology discovered by Sabine Brouxhon, MD, Clinical Associate Professor in the Department of Emergency Medicineat Stony Brook University School of Medicine. The technology involves use of an antibody-based cancer therapy that down-regulates a plethora of pathways associated with resistant disease. The approach could advance treatment for patients with many forms of cancer, including breast, colorectal, lung, skin, and other epithelial-derived cancers.

The agreement involves CadheRx Therapeutics in-licensingthe intellectual property developed from the laboratory of Dr. Brouxhon. The company is financially backed by Avalon Ventures and is one of six start-up companies formed out of a collaboration between Avalon Ventures and GSK that was established in April 2013 to fund up to a total of 10 new companies through a preclinical proof of concept. CadheRx will develop therapeutic antibodies targeting soluble E-cadherin for the treatment of solid tumors that display resistance, particularly to the commonly used drugs Herceptin and Cetuximab. Importantly, soluble E-cadherin levels are increased in the milieu of many solid tumors and contributes to enhanced tumor cell proliferation, migration, and invasion, which is linked to metastatic disease.

“Today’s announcement marks another example of the life-changing impact of treatments and discoveries founded on SUNY campuses,” said SUNY Chancellor Nancy L. Zimpher. “Projects supported by SUNY TAF funding have an astounding effect on the health and well-being of New York’s citizens, industries, and communities. Congratulations to Dr. Brouxhon and Stony Brook University on this tremendous collaboration and achievement.”

“It’s extraordinarily exciting to see a basic research discovery from a Stony Brook University scientist turn into something that might improve people’s lives in a very powerful way,” said Samuel L. Stanley Jr., MD, President of Stony Brook University. “Cancer affects millions of people worldwide, and Dr. Brouxhon’s work on this new anti-cancer technology offers continued hope in the fight against many forms of cancer.”

“One of the most significant drawbacks from current cancer treatments is that despite their initial effectiveness against solid tumors, patients often develop resistance to these treatments,” said Dr. Brouxhon. “Our lab has discovered a novel antibody-based cancer therapy that acts through a completely different mechanism of action compared to existing drugs in industry. Notably, the antibody down-regulates multiple resistant pathways, thereby minimizing the cancer cells ability to recruit many interconnected oncogenes that are linked with resistant disease.”

Dr. Brouxhon and colleagues have successfully tested the antibody therapy on several National Cancer Institute (NCI)-designated epithelial-derived cancer cell lines and preclinical cancer models. Additional studies by her laboratory have shown that the agent is selectively cytotoxic to cancer cells while not harming healthy cells or tissues. This could prove to be another advantage to the potential therapy, as conventional chemotherapy tends to destroy healthy tissues.

The research leading to the discovery began at Stony Brook in 2010. In 2013, Dr. Brouxhon received a SUNY Technology Accelerator Fund (TAF) award from the SUNY Research Foundation to accelerate the development of the anti-cancer technology and help bring it to commercialization. The research has also been supported by the NIH, the Komen Foundation and Stony Brook University start-up funding.

Dr. Brouxhon will consult with CadheRx to further advance the anti-cancer technology.