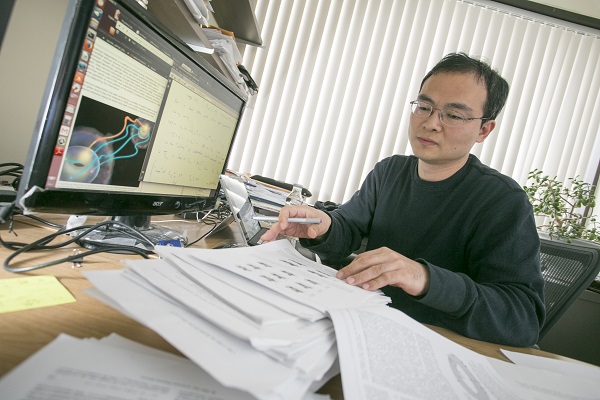 Stony Brook, NY, June 5, 2015–  A team of scientists have taken quantum teleportation – a method of communicating information from one location to another without having to physically move it – to a higher level by using certain high-dimensional states (which they dubbed “donut” states) for teleportation. Stony Brook University physicist Tzu-Chieh Wei, PhD, and colleagues nationally demonstrated that their method works, is more reliable than previous teleportation schemes, and could be a stepping stone toward building a quantum communications network. Their findings appear in Nature Communications.

The researchers developed entangled elementary particles – in this case photons, the smallest units of light – to transmit information through a shared pair of entangled quantum state of photons – both the sender and receiver have one photon, one half of each entangled pair. In simple communication terms, the process of superdense-teleporting would involve one person to encode information in the form of a quantum state on his photon. Then the person would perform measurement on his photon and then use traditional communication channels (phone or email) to let the other person know what operation to perform on her photon in the laboratory to re-create the same quantum state.

“This process of a re-creation is essentially a transport without having any matter move from location A to location B,” said Dr. Wei, an Assistant Professor in Yang Institute for Theoretical Physics at Stony Brook University. “Loosely speaking you could also view teleportation as a miniature version of teletransportation in the ‘Star Trek’ movies.”

Dr. Wei also likened the teleportation method as quantum information created and then stored in a kind of invisible parallel “shared folder” for end users. A broadening and testing of this concept could help to form a quantum communications network that could potentially be used to encode and transmit useful quantities of quantum data for scientific experimentation and communication virtually anywhere on earth or in space.

In “Superdense teleportation using hyperentangled photons,” the team took advantage of the mathematical properties intrinsic to the shape of a donut – or torus, in mathematical terms to use “superdense teleportation.” The work, led by physicist Paul Kwiat of the University of Illinois, built on this new protocol for teleportation that was developed by co-author physicist Herbert Bernstein of Hampshire College in Amherst, Mass. The method effectively reduces the resources required to teleport quantum information, while at the same time improving the rate and reliability of the information transfer.

With this new method, the researchers experimentally achieved 88 percent transmission fidelity, twice that of 44 percent, the very best that could be achieved by any system that didn’t have access to the entangled quantum resource. To make the whole process more efficient, the protocol uses pairs of photons that are “hyperentangled” – simultaneously entangled in more than one property, in this case in polarization and in orbital angular momentum – with a restricted number of possible states in each variable. Using multiple properties allows each photon to carry more information than the earlier quantum teleportation experiments.

Dr. Wei’s role in the research was to analyze the theoretical performance of the superdense teleportation, and to show that the kind of quantum states—the donut states—teleported can encode high density of information.

“My analysis helped to demonstrate that our method not only solves a measurement problem previously encountered but also gives a much better rate of encoding information that can be transmitted,” he said. “My colleague’s experiment demonstrated for the first time ‘superdense teleportation’ of many states on a three-dimensional torus and showed that the performance exceeds twice that can possibly be achieved without the use of entanglement.”

The research is supported by the National Science Foundation and NASA.

For more information about the Superdense Teleportation research, see this feature piece from the University of Illinois.