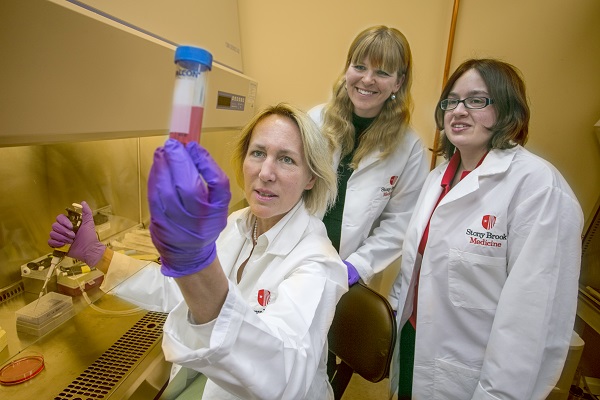 Stony Brook, NY, May 26, 2015 – Removing accumulated mutant p53 protein from a cancer model showed that tumors regress significantly and survival increases. This finding, by an international team of cancer researchers led by Ute Moll, MD, Professor of Pathology at Stony Brook University School of Medicine, is reported in a paper published advanced online May 25 in Nature.

For two decades cancer researchers have looked unsuccessfully for ways to develop compounds to restore the function of mutant p53 proteins. This team of researchers discovered that eliminating the abnormally stabilized mutant p53 protein in cancer in vivo has positive therapeutic effects.

p53 is the most important tumor suppressor protein that protects our cells from becoming cancerous. However, mutations in p53 that insert incorrect amino acids can generate aberrant proteins with not only abrogated tumor suppressor function but newly gained oncogenic function (GOF) that promote malignant progression, invasion, metastasis and chemoresistance. Importantly, mutant p53 (mutp53) proteins undergo massive accumulation specifically in tumors, which is the key requisite for GOF. Mutp53 is expressed in 40 to 50 percent of all human tumors and although currently 11 million patients worldwide live with tumors expressing highly stabilized mutp53, it was hitherto unknown whether mutp53 is a therapeutic target to treat cancers.

“Our study clearly shows that mutp53 overexpressing tumors are dependent on continuous overexpression for survival and maintenance,” said Dr. Moll. “This model has direct relevance for similar cancers in humans with the same mutation. Our work may have important clinical implications and be a foundation for a new way to treat mutp53-related cancers.”

Dr. Moll explained that the methods researchers used to treat the mutp53 cancers are two-fold: genetic ablation of the mutp53 gene and pharmacologically attacking the molecular apparatus that is responsible for stabilization of mutp53.

They discovered that, overall, when mutp53 is depleted, tumors regress or stagnate for some time because tumor cells die. This results in mice surviving longer, gaining an increase of 37% to 59% in lifespan.

Dr. Moll added that if cancer researchers are able to identify human p53 tumors that are equally dependent on continuous p53 overexpression, the drug they used in this study could potentially improve clinical survival and/or enhance tumor sensitivity to other anti-cancer drugs.

Co-authors of the paper include E. M. Alexandrova, A.R. Yallowitz, D. Li, and S. Xu from the Department of Pathology at Stony Brook University; D.A. Proia from Synta Pharmaceuticals; G. Lozano, Department of Cancer Genetics at the University of Texas MD Anderson Cancer Center in Houston; and M. Dobbelstein, of the Institute of Molecular Oncology at the University of Gottingen in Germany.