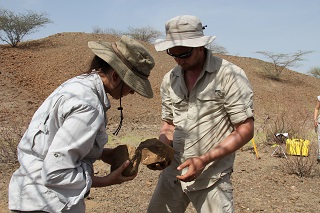 Stony Brook, N.Y., May 20, 2015 – Our ancestors were making stone tools even earlier than we thought—some 700,000 years older. That’s the finding of the West Turkana Archaeological Project (WTAP) team—co-led by Stony Brook University’s Drs. Sonia Harmand and Jason Lewis—who have found the earliest stone artifacts, dating to 3.3 million years ago, at a site named Lomekwi 3 on the western shore of Lake Turkana in northern Kenya.

In the 1930s, paleoanthropologists Louis and Mary Leakey unearthed early stone artifacts at Olduvai Gorge in Tanzania and named them the Oldowan tool culture.  In the 1960s they found hominin fossils (in association with those Oldowan tools) that looked more like later humans—and assigned them to a new species, Homo habilis, handy man.

“The site at Lomekwi provides an ideal window into early hominin behavior across an ancient landscape.  The exposures of sedimentary strata there allow us to place these activities in a detailed environmental context, and to tightly constrain their age” notes geologist Craig Feibel of Rutgers University, a co-author on the study.

What the experts are saying:

“The paper by Harmand et al describes a truly pathbreaking discovery, and moves the date of the earliest flaked stone artifacts back by almost 3/4 of a million years. In addition, the careful documentation of the Lomekwi flaking techniques in this and forthcoming papers shows them as more primitive than those seen within the time range of Homo. This reaffirms the argument that the repeated and competent manufacture of useful sharp edges, on which we came to depend, may have been a driving factor in the evolution of our genus, both anatomically and cognitively.

“It also confirms an assertion we made in a 2002 paper [“Older than the Oldowan,” Panger et al. Evolutionary Anthropology] that the oldest Oldowan artifacts at 2.5+0.15 Ma were too sophisticated to represent the dawn of human technology. Harmand’s paper raises questions about who the earliest stone tool makers were—was Kenyanthropus platyops found nearby in the same time range actually the precursor to Homo as its discoverers suggested? Stay tuned.”

“This is a landmark discovery pertaining to one of the key milestones in our evolution, tool making. Our team’s discovery of cut-marked bones [the marks were
inflicted while carving meat off the bone of a mammal]
in Dikika, Ethiopia—dating back to 3.39 Ma [mega-annum, or million years]—indicated that Homo habilis, ‘the handy man,’ was not the first in our lineage to use tools.

“Dr. Harmand’s team’s crucial find takes this further, and shows that other, earlier species not only used but also made tools. With the cut marks from Dikika we had the victim—Harmand’s discovery give us the smoking gun. Now there is a solid reason to think about early hominin behavior differently, and establish that stone tool use and making occurred prior to 2.6 Ma. This calls for the revision of our theoretical framework and fieldwork methods related to the study of earliest human behavior.”

“The Lomekwi stone tools join cut-mark evidence from Dikika in pushing the origins of stone cutting tools back to almost 3.5 million years ago. This raises new questions about the differences between stone tools made by earlier hominins and those by recent humans. The really interesting scientific question is, ‘What pushed early hominins to make stone tools at that place and at that point in time? What were they doing with the tools?’”

“The capabilities of our ancestors
—and the environmental forces—leading to early stone technology are a great scientific mystery. The modified stones from Lomekwi begin to lift the veil on that mystery, at an earlier time than expected. Researchers have thought there must be some way of flaking stone that preceded the simplest tools known until now. Harmand’s team shows us just what this even simpler altering of rocks looked like before technology became a fundamental part of early human behavior.”

“Many have expected the threshold of stone tool making to be pushed back in time but the Lomekwi excavations really do represent a major advance in our understanding. This is a seminal discovery and publication.”