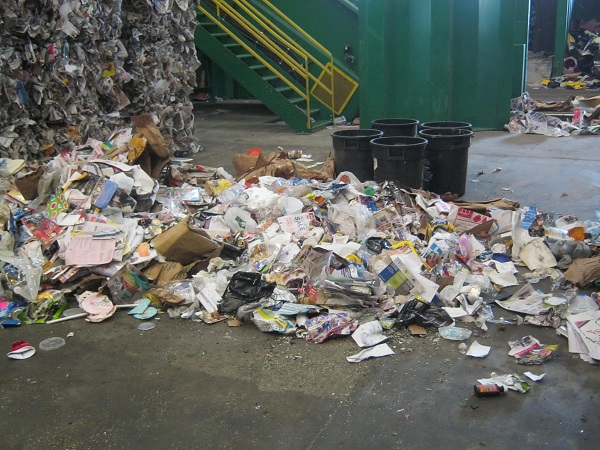 STONY BROOK, NY, April 22, 2015 – Researchers at the Department of Technology and Society at Stony Brook University released a report today that analyzed the 2014 Town of Brookhaven switch from dual stream recycling (separating the collection of paper and containers) to single stream recycling (paper and containers collected together). The report revealed that the change led to a 25 percent increase in recyclables recovered from 2013 to 2014, and significantly fewer recyclable materials mixed in with the disposable trash.

The report, titled “Analysis of the Change from Dual Stream to Single Stream Recycling for the Town of Brookhaven (Long island, NY)”, led by Dr. David J. Tonjes, Assistant Professor in the Department of Technology and Society, and a researcher for the Waste Reduction and Management Institute at the School of Marine and Atmospheric Sciences (SoMAS), compares and analyzes recyclable materials and trash disposals within the town over a two-year period.

“The results of the report surprised me,” said Dr. Tonjes. “We did not expect to detect such a large shift in the waste stream over two years, and we did not predict that single stream recycling would lead to increases in recycling efficiency like this.”

The research team, which includes Dr. Tonjes, Omkar Aphale, Lori Clark, and Krista L. Thyberg, is likely to continue to sample the Town’s waste in the future, to determine if the trends continue, and also to track the results of single stream recycling.

“I am very proud that Stony Brook has recognized the Town as the leader in single stream collection on Long Island,” said Brookhaven Town Supervisor Ed Romaine. “In just one year, our program has had a tremendous environmental and economic impact to the Town and I am very proud of the way we have come together to make it a success. It’s clear that residents have embraced our program and the results of this report speak for themselves. But, there’s more that we can do, and in the next year I expect to bring other municipalities, school districts, hospitals and more on board to participate in the program.”

“Other towns have followed Brookhaven’s lead and switched to single stream collection: Smithtown, Huntington, Southold,” said Tonjes. “A number of villages within and outside of the Town have also made the change. This may be something that can be adopted generally across Long Island to arrest the slide in recycling tonnages measured across the region.”

These data illustrate large shifts from flat or decreasing recycling trends, measured in the Town of Brookhaven over the past decade, but also for all Long Island and across the nation generally.

The research conducted on the changes brought about by single stream recycling included sorting 9,390 lbs. of garbage and recyclables from three of the Town’s 35 waste districts in October 2014. This effort paralleled similar work undertaken in 2012 (when over 12,000 lbs were sorted). The three districts (District 1 in Stony Brook, District 18 in Ronkonkoma, and District 31 in Shirley) represent better, average, and poorer recycling areas in the Town. The sampling efforts allowed conclusions to be drawn about how residents’ behavior changed with single stream recycling. The data showed that although each district increased its separation of materials for recycling, each districts’ residents also tended to set out more non-recyclable materials under single stream. In fact, much of the increase in separation in the poorer district came from the increase in non-recyclables put out at the curb for recycling. All three districts separated paper recyclables better with single stream but were poorer at separating containers for recycling.

When the disposed waste and recyclables were considered together, it was found that there had been a decrease in the amount of recyclable materials available for Town residents to separate. This meant that the “separation efficiency” (the ability to set aside materials that should be recycled) improved under single stream recycling. The effect was driven by increases for paper recyclables and offset by decreases in separation efficiency.

Changes in materials use means there are fewer recyclables available for recovery — but the single stream recycling program led to a higher percentage of what was available being set out for recovery.  There was also a decrease in the amount of potentially recyclable materials in the garbage intended to be disposed.  In 2012 about 30% of the materials sent for incineration were recyclable, but the amount of recyclables set out for disposal in all three districts was less than 25% in 2014.