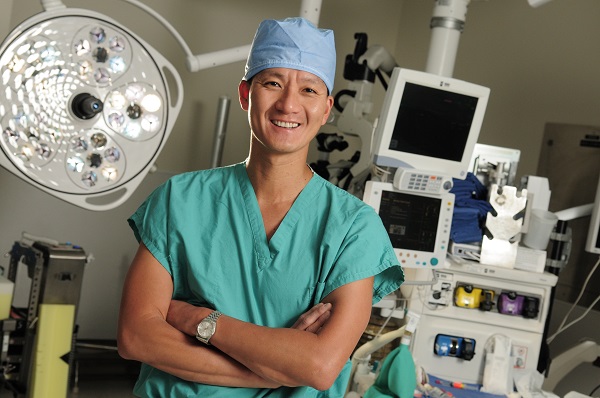 Dr. Henry Woo and colleagues nationally assess the approach in a Journal of Neurosurgery paper

Stony Brook, NY, April 3, 2015
– Henry Woo, MD, Professor and Vice Chair in the Department of Neurological Surgery, Director of the Cerebrovascular Center and Co-Director of the Cerebrovascular and Stroke Center at Stony Brook Medicine’s Neurosciences Institute, along with other national leaders in neurosurgery, strongly endorse interventional thrombectomy in the treatment of acute ischemic stroke secondary to emergent large brain vessel occlusions in a paper published online in the Journal of Neurosurgery
.

Until recently, intravenous thrombolytic therapy (drugs to breakup or dissolve clots) alone was the only proven treatment for acute ischemic stroke. But a study published in the January 1 issue of the New England Journal of Medicine brought the advantages of interventional thrombectomy to light in a paper titled “A Randomized Trial of Intraarterial Treatment for Acute Ischemic Stroke.”

Dr. Woo and colleagues assessed the strength of this trial – called the MR CLEAN (Multicenter Randomized Clinical Trial of Endovascular Treatment for Acute Ischemic Stroke in the Netherlands) trial, which treated 500 stroke patients with imaged-confirmed occlusions of proximal arteries in the anterior cerebral circulation.

In MR CLEAN, half of the patients received medical treatment alone. The other half received medical treatment and cerebrovascular intervention, in which 82 percent was accomplished by retrievable stents. The study showed the addition of interventional thrombectomy proved more favorable than the standard drug treatment with a 13.5 percent improvement in the absolute rate of functional independence between the two treatment groups.

“This landmark study now demonstrates that thrombolytic therapy is no longer the only proven treatment for acute stroke,” said Dr. Woo, lead author of the Journal of Neurosurgery paper, titled ‘MR CLEAN: past the tipping point of clinical equipoise.’  “Thrombolytic therapy with appropriate procedural interventions will help reduce the likelihood of patient disability or death, particularly with those patients who suffer emergent large-vessel occlusions.”

The authors describe differences between MR CLEAN and three previous studies that were unable to prove the advantages of interventional thrombectomy for acute ischemic stroke. They concluded that the earlier studies lacked imaging confirmation of large-vessel occlusion, used antiquated interventional technologies, and incorporated insufficient statistical power.