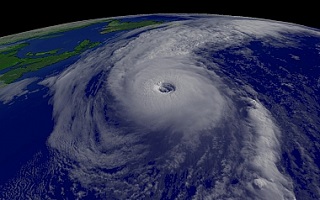 Stony Brook, NY, March 17, 2015 – A team of scientists including Minghua Zhang, Dean and Director of Stony Brook University School of Marine and Atmospheric Sciences (SoMAS), have found that the size of tropical cyclones is controlled by their underlying sea-surface temperatures (SST) relative to the conditions of the mean SST within the surrounding tropical zone of the storms. Their findings, published early online in Nature Communications, imply that under a warmer climate, the size of tropical cyclones (including hurricanes), are not based on the absolute value of SST alone.

Scientists believe that the size of cyclones (total rainfall area/radius) is likely controlled by two conditions: the intensity of the storms and the SST. But in this paper, titled “Tropical cyclone rainfall area controlled by relative sea surface temperature,” the research team examined relative conditions and found that aspect to be a more accurate predictor of the tropical cyclone size.

“This research was conducted in the context of climate change, and our findings help us understand what controls the sizes of these storms and what measurement data are needed to better predict the impacted areas they cover,” said Professor Zhang, who conducted research on the theoretical explanation of the relationship between the tropical cyclone size and SST.

“We know that tropical cyclone precipitation will be stronger when sea-surface temperatures are higher, but is not clear whether the stronger precipitation is associated with higher intensity rates or larger areas, or both,” explained Dr. Zhang. “Our study showed that if the sea-surface temperatures are uniformly higher around the cyclone region, the cyclone sizes will be similar to the affected tropical zone.”

The researchers analyzed 1,142 tropic cyclones worldwide by using high resolution space-borne radar and microwave measurements of precipitation aboard NASA’s Tropical Rainfall Measuring Mission (TRMM) satellite and tropical cyclone track data from the International Best Track Archive for Climate Stewardship22 program. They investigated the controlling factors of each of the tropical cyclone sizes and found that the relationship of the cyclone sizes with the intensity of the cyclones, combined with the absolute values of SSF together are weak, but the relationship between the relative values of the SST and the cyclone sizes is strong.

“We were able to also provide a theoretical explanation to this strong relationship with relative SST and confirmed the results in numerical model simulations,” added Professor Zhang.

Paper co-authors and investigators include Yanluan Lin, lead author, from the Tsinghua University in China, and Ming Zhao of the GFDL.