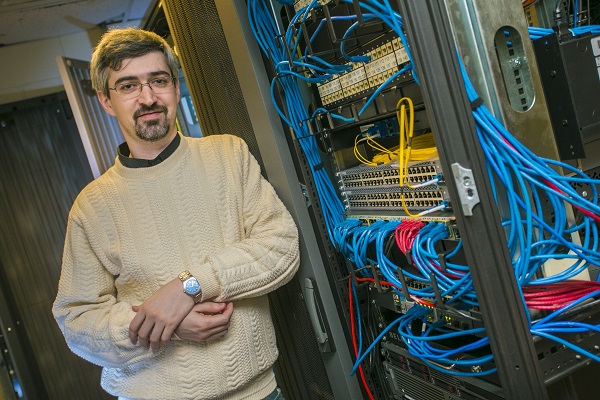 According to the NSF, the CAREER Award is given to promising young university faculty who exemplify the role of teacher-scholar through outstanding research, excellent education and the integration of both education and research.

“The NSF CAREER Award is one of the highest honors a junior faculty member can receive nationally, and I congratulate Professor Ferdman on winning the award,” said Samuel L. Stanley Jr., MD, President of Stony Brook University. “The funding provided through this award helps young faculty advance their promising research, which adds greatly to the scope of Stony Brook University’s STEM research and education initiatives.”

Ferdman’s project combines his extensive work on prefetching for server applications with his award-winning work on benchmarking cloud workloads. The goal of the project is to direct the research toward micro-architectural enhancements that will benefit server performance and energy efficiency while educating the next generation of server architects.

“Ferdman’s CAREER award further solidifies Stony Brook as a leader in computer science research at the highest level of innovation,” said Dennis N. Assanis, Provost and Senior Vice President for Academic Affairs at Stony Brook University. “We hope to continue to recruit faculty such as Dr. Ferdman who are leaders in computer technology and incorporate their innovative research into undergraduate and graduate courses.”

The CAREER research conducted by Ferdman seeks to influence the comprehension of temporal streaming to improve the practicality of this technique and solve three micro-architectural challenges in servers; 1) compressed temporal stream storage, 2) branch prediction based on temporal streaming, and 3 )eliding execution of redundant temporal streams.

“The broader impacts of this work will result in sustainable growth in data centers and online services,” explained Ferdman. “It will also benefit the data center research community through the creation of cloud benchmarks.”

Arie Kaufman, PhD, Distinguished Professor and Chair of the Department of Computer Science at Stony Brook, highly recommended Ferdman for the NSF award.

Soon after receiving his PhD in Electrical and Computer Engineering from Carnegie Mellon University, Ferdman joined Stony Brook University. His academic interests include computer architecture, with a particular emphasis on the design of efficient server systems. His primary research objective is to “understand the fundamental properties an interactions of application software, operating systems, networks, processor microarchitecture, and datacenter dynamics, to enable software and hardware co-design of high-performance, power-efficient, and compact servers.”

Ferdman is also a recent recipient of the IEEE Micro Top Picks from the Computer Architecture Conference in 2013, and a Best Paper Award winner at the 17th International Conference on Architectural Support for Programming Languages and Operating Systems (ASPLOS).