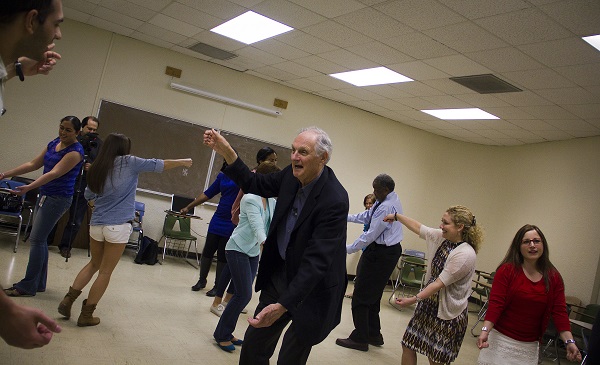 STONY BROOK, N.Y., February 2, 2015 – Alan Alda, renowned actor, director, writer, and a founding board member of Stony Brook University’s Alan Alda Center for Communicating Science, has been elected a Fellow of the American Physical Society (APS). Alda will be recognized with other new fellows in the March issue of APS News.

The APS honor was awarded to Alda “For his contributions to science education, creation of the Alan Alda Center for Communicating Science which helps scientists improve their communication skills, and his work with projects which promote physics and science in the media.”

“I’m surprised, honored and delighted to be named a fellow of the American Physical Society,” Alan Alda said. “It’s an honor for all of us at the Alda Center for Communicating Science, and it thrills me that the APS values our work in helping scientists communicate with the public.”

Alda is best-known for his acting roles in television, movies and theater, starting with surgeon Hawkeye Pierce in “MASH,” but he also has been a lifelong science advocate. As host of PBS’ Scientific American Frontiers from 1993 to 2005, he talked with hundreds of scientists around the world and saw that they communicate much better when they carry on real, personal conversations about their work, rather than lecturing or falling back on technical language.  He brought that insight to Stony Brook University, inspiring the University to create the Center for Communicating Science in 2009. “The blossoming of the Center for Communicating Science at Stony Brook has been a dream come true for me,” Alda said in 2013, when the Center was renamed in his honor.

The Alda Center works to enhance understanding of science by helping scientists and health professionals – from graduate students to senior scientists – learn to communicate more effectively with the public, public officials, the media, and others outside their own discipline. Alda, also a Visiting Professor of the Stony Brook University School of Journalism, participates in many of the Center’s activities.

“Alan Alda has used his diverse stage talents and abilities as a communicator to help build an academic center that makes communicating science a mission for our faculty and students,” said Dennis N. Assanis, Provost and Senior Vice President for Academic Affairs at Stony Brook University. “Being named an APS Fellow is a high honor, and for Alan Alda and his invaluable contributions to promoting science, it is one that is well-deserved.”

The APS, a leading organization of 50,000 physicists, works to advance physics through its research journals, scientific meetings, education, outreach, advocacy, and international activities.

Alda has a special connection to physics. He helped create the play QED, about Nobel Prize-winning physicist Richard Feynman, and he played the role of Feynman on Broadway.  In 2002, Alda gave a much-noted commencement address at Caltech, where Feynman had taught, inspiring scientists to communicate better with the public.

The Alda Center uses improvisational theater exercises, among other techniques, to help scientists learn to share their work and their passion more directly with the public. The Center offers courses for graduate students at Stony Brook, workshops for scientists and health professionals around the country, and outreach activities, such as the Flame Challenge, an international science-communication contest.

In the Flame Challenge, scientists try to explain complex science in a way that would interest and enlighten an 11-year-old – and thousands of 11-year-olds judge their entries. This year scientists are being challenged to answer the question, “What is sleep?”  The deadline for entries is Feb. 13. The winners will get $1,000 and be honored at a special event hosted by Alda at the World Science Festival in New York. Scientists, and teachers who would like their classes to help judge the contest, can find more information at FlameChallenge.org.

The Alan Alda Center for Communicating Science at Stony Brook University was established in 2009 within Stony Brook’s School of Journalism, in collaboration with Brookhaven National Laboratory and Cold Spring Harbor Laboratory, with the goal of training the next generation of scientists to communicate more effectively with the public. Stony Brook, located on Long Island, is part of the State University of New York.

Since the Center began offering graduate level courses to Stony Brook University masters and PhD students in 2011, more than 300 graduate science students have taken its courses.  Two graduate programs at Stony Brook now require its courses, and the Stony Brook School of Medicine has incorporated 10 hours of Alda Center instruction into the curriculum for incoming students.

In addition to its work at Stony Brook, the Center has conducted training workshops at universities and other science-oriented institutions around the country ranging from Stanford, Cornell, Dartmouth and the University of Chicago to Argonne National Laboratory and the National Cancer Institute. Its Alda Kavli Leadership Program offers special workshops for experienced science leaders. The Alda Center also offers a Summer Institute (June 8-12 on the Stony Brook campus) for faculty and administrators who want to start similar programs, and a Summer Skills Boot Camp people (June 15-19, on the Stony Brook campus). More information on the Alda Center is available at AldaCenter.org and FlameChallenge.org.