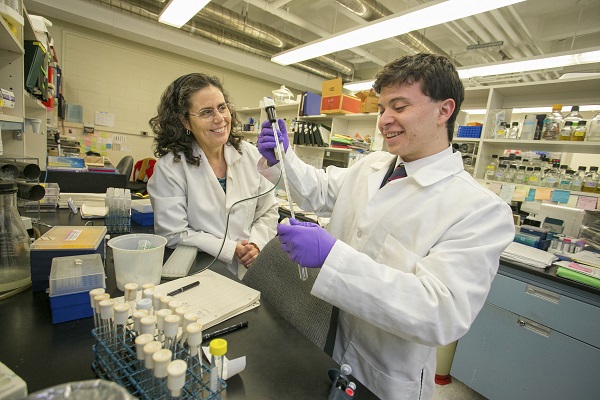 STONY BROOK, N.Y., January 7, 2015 – Jay Zussman is a striking example of the scientifically minded youth of today who are tackling our most intractable problems. The high school senior spent last summer working in the lab of Nancy Hollingsworth, professor in the Department of Biochemistry and Cell Biology at Stony Brook University. His findings won him 5th place and a $20,000 prize in the Siemens Competition in Math, Science & Technology and landed him a semifinalist spot in the prestigious 2015 Intel Science Talent Search.

Hollingsworth studies the specialized cell division of meiosis, which is used by sexually reproducing organisms like humans to produce the gametes necessary for creating offspring. Working in her lab, Zussman studied the regulation of a critical protein-protein interaction in meiosis that could lead to a better understanding of human gamete formation. By studying the formation of sex cells in a yeast model, he discovered a “fail-safe” mechanism that ensures that gametes have the right number of chromosomes, which is critical for human fertility. Mistakes in meiosis can also lead to human disorders like Trisomy 21 (Down syndrome).

“Limited previous data suggested that two proteins, Zip1 and Sgs1, might interact during meiosis, and it was hypothesized that this interaction might circumvent meiotic errors to allow for proper gamete formation,” Zussman says. “I compared the rate of successful meiosis in yeast strains with various mutations of ZIP1 with or without SGS1 present, to pinpoint regions of the protein that are functionally important for Zip1-Sgs1 interaction.”

“Jay hit the jackpot, and got a really interesting result,” Hollingsworth says.

Zussman explains. “I found that phosphorylation—addition of a negatively charged phosphate group—to the Zip1 protein at two specific amino acids activates a regulatory pathway involving Zip1-Sgs1 interaction. This allows the cell to progress through meiosis—even when the Zip1 protein is impaired because it hasn’t been phosphorylated in other locations. This clarifies a key mechanism in meiosis that adds to our understanding of this complex reproductive puzzle.”

Stony Brook would be a great place to conduct his scientific studies. “Stony Brook has unparalleled faculty and facilities for groundbreaking scientific research,” he says. “It was my honor to study there and learn from the absolute best.”

Hollingsworth was glad to have the young man. “Jay is incredibly enthusiastic and a very hard worker,” she says. “He asked great questions, and read the papers I suggested to him. In addition, he has ‘great hands’ in the lab. Because he is careful when he does his experiments, he only has to do them once to get a result, which is part of why he was so productive. He is one of those people who you know will be successful in whatever he does.”

Zussman credits Hollingsworth with setting him on the right path. “Professor Hollingsworth has taught me the deepest value of perseverance—that relentless pursuit of scientific answers enables the greatest scientific discoveries. She has become an incredible role model to me, and I hope to go through my professional endeavors with the same tenacious devotion to scientific inquiry. She was invaluable to me as a mentor, giving me necessary guidance when I needed it, but letting me fly solo in the laboratory as soon as I demonstrated mastery of key procedures and ideas.”

Hollingsworth takes mentoring seriously, especially when it comes to conveying the scientific method. “What we are searching for is the truth—if the data indicate that our hypothesis is wrong, so be it,” she said to him. “I told him this because I didn’t think it was likely his original hypothesis would pan out—most ideas don’t. When he got the interesting result, I told him that the more interesting a result is, the more one has to challenge it with controls, to make sure the interpretation is right. He did all of the additional controls, and still the idea held true.”

The high school senior, an accomplished clarinetist who has performed at Carnegie Hall, hopes one day to become a physician—potentially specializing in fertility medicine. “My experiences with Professor Hollingsworth this summer have both intensified and clarified my ambitions,” Zussman says. “I’d like to continue studying meiosis in college and beyond, helping to fuel my fascination for human reproduction and my passion for aiding human reproductive health.”

Hollingsworth is gratified that she and Stony Brook could play a role in the pursuit of that dream. “It is very important for young people to have the opportunity to see that science is not some boring topic taught in school but a compelling, dynamic process of puzzle solving and discovery,” she says. “We need to encourage bright people like Jay to engage in science so the world can benefit by their creative minds. For that to happen, they have to see firsthand how fun it is.”