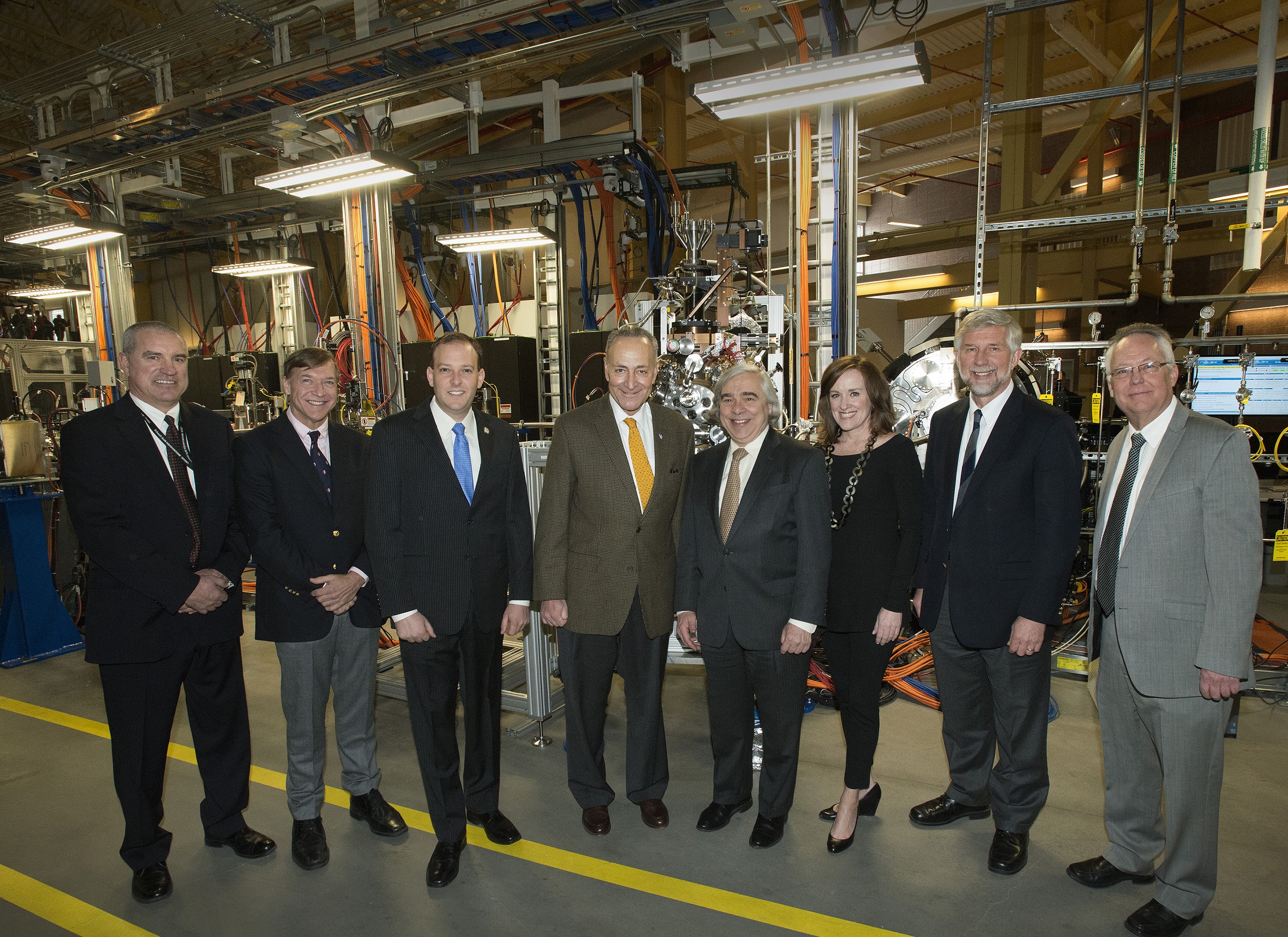 NSLS-II will enable a future generation of scientists to continue building on the 32-year legacy of research at Brookhaven’s first light source, NSLS, which directly resulted in two Nobel Prizes and contributed to a third. With $150 million in funding through the American Recovery and Reinvestment Act of 2009, NSLS-II has come online on time and under budget to usher in the next chapter of light source capability. The planning, design, and construction of the 627,000-square-foot NSLS-II facility spanned 10 years, and when all beamlines are fully built out, NSLS-II will be able to support thousands of scientific users each year.

“The research performed at NSLS-II will probe the fundamental structure of novel materials and help drive the development of low-cost, low-carbon energy technologies, spark advances in environmental science, and spur medical breakthroughs,” said Secretary Moniz. “The successful completion of this crucial component of the United States’ research infrastructure will ensure that top researchers from across the country will have access to the needed facilities to drive key scientific and technological advances in the 21st century.”

“The completion of the NSLS-II at Brookhaven National Lab is great news for Long Island, New York and America; that’s why I fought so hard to secure millions in federal funding to realize this dream. Brookhaven National Lab is home to some of the world’s brightest minds and most cutting-edge innovations, which both advance human knowledge and spur our economy. I will continue to be a fierce advocate for BNL — and technology and research in general – because that is essential to keeping Long Island and America number one,” said Senator Schumer.

Stony Brook University President and Brookhaven Science Associates Chair Samuel L. Stanley Jr., M.D.: “This is the moment we have all been waiting for, dedicating NSLS-II, Brookhaven Lab’s brilliant new light source,” said President Stanley. “With this world class facility in such close proximity to Stony Brook University – its largest outside user – and Brookhaven Science Associates’ partner institutions, we are providing an unparalleled resource to current and future generations of faculty and students, and a vast cadre of users in the scientific community. I look forward to the many collaborations and discoveries to be made in energy storage, environmental science, biology and other important areas that NSLS-II can affirmatively impact and move our society forward.”

Brookhaven National Lab’s National Synchrotron Light Source II (NSLS-II)
As a DOE Office of Science User Facility, NSLS-II will offer researchers from academia, industry, and national laboratories new ways to study material properties and functions with nanoscale resolution and extreme sensitivity using state-of-the-art x-ray imaging. The x-ray brightness at NSLS-II exceeds that of any other existing synchrotron light source in the world and has the capacity to operate 60 beamlines with a range of soft to hard x-rays.

Science programs planned at NSLS-II will play a crucial role in addressing grand challenges facing the nation and the world. NSLS-II will fuel major advances in materials that will enable new energy technologies – such as nanocatalyst-based fuel cells; widespread, economical use of solar energy; high-temperature superconductors for the nation’s electric grid to deliver more electricity more efficiently; advanced batteries for electric vehicles and grid-scale storage; and next-generation nuclear power systems.

As was the case at NSLS, a large portion of scientific users at NSLS-II are expected to be life scientists, using the powerful x-ray beams to explore the structures of proteins and other biological molecules. NSLS-II will be particularly well-suited to conduct studies of difficult-to-crystalize proteins found embedded in cellular membranes, such as those that form the receptors for viral invasions, interactions with hormones and other signaling molecules, and key agents of the body’s immune system. Structural studies of such proteins are increasingly important in the design of new drugs and therapies—an area where NSLS-II is poised to play an essential role.

Construction and operations of NSLS-II are supported by the DOE Office of Science.