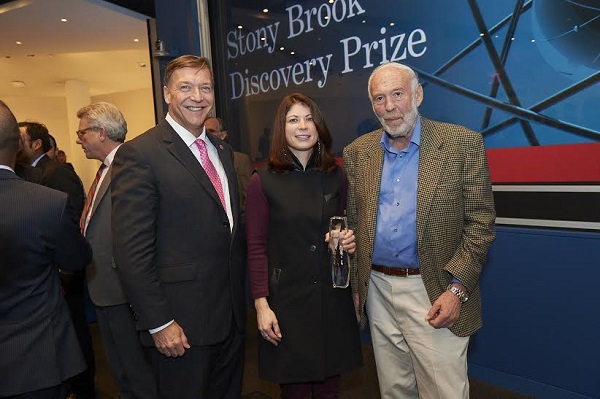 A recap of highlights and historical moments from 2014

Stony Brook Launches Discovery Fund; Awards Discovery Prize Following Historic Competition –  A $500,000 donation from the Stony Brook Foundation to create the “Discovery Fund,” in response to a nationwide call to augment public funding of university research with philanthropic support. This gift enabled Stony Brook University to establish the Discovery Prize, all of which is part of a broader commitment by President Stanley and the Foundation to raise $25 million to invest via future awards to faculty over the next 10 years. After a “Shark Tank”-meets-“TED Talk”-styled competition among four finalists at the Simons Foundation headquarters in New York City Laurie T. Krug, an Assistant Professor in the department of Molecular Genetics and Microbiology became the first early career scientist to be named the Stony Brook University Discovery Prize Fellow. Krug was selected for her project that researches herpes viruses that are associated with cancer and the idea of delivering molecular scissors to the site of virus infection using nanoparticles. Alan Alda gave the opening remarks and Paul Hoffman, president and CEO of the Liberty Science Center was master of ceremonies.

Patricia Wright the 2014 “It” Girl in Conservation and Biodiversity – It was a magnificent year for Stony Brook Biological Anthropologist Patricia Wright, PhD, who made news throughout 2014. First when she became one of three Stony Brook University research-conservationists to be among the six finalists for the 2014 Indianapolis Prize, which she was ultimately chosen to receive, for her work rehabilitating the Lemur population in Madagascar; her work was also featured in an IMAX film, “Island of Lemurs Madagascar,” narrated by Academy Award® winning actor Morgan Freeman, released in Hollywood premiere fashion on April 4 and re-released  more broadly in August; and, Dr. Wright was honoree at the Stony Brook Foundation’s Stars of Stony Brook Gala, where more than $4M was raised, in part to support health, conservation and biodiversity efforts based at Stony Brook University’s Centre ValBio in Madagascar.

Sir Simon Donaldson Named Breakthrough Prize Laureate – Sir Simon K. Donaldson, who became a permanent member of the Simons Center for Geometry and Physics in January this year, was selected by the Breakthrough Prize Foundation as an inaugural recipient of the $3 million Breakthrough Prize in Mathematics. The Prize, which aims to recognize major advances in the field, honor the world’s best mathematician, support their future endeavors and communicate the excitement of mathematics to the general public, was presented at a star-studded gala held at the NASA Ames Research Center in Mountain View, California.

Doctors Perform Open-Heart Surgery on Patient 27-Weeks Pregnant – Maximus Daniels was born on April 2, 2014 weighing in at 7 pounds, 3 ounces at Stony Brook University Hospital, not long after his mother, Sharon Savino, had open-heart surgery while 27-weeks pregnant to remove a tumor from her heart. Savino’s tumor, an atrial myxoma, presented a serious and immediate health threat according her heart surgeon, James Taylor, MD, Chief of the Division of Cardiothoracic Surgery at Stony Brook University Hospital and Co-Director of the Heart Institute. “The tumor could have obstructed her mitral valve at any time, causing sudden death. Segments of the tumor could have also broke free and traveled within the blood stream, leading to organ damage or stroke.”

Annie Baker Wins Pulitzer Prize for Drama – Critically acclaimed playwright Annie Baker, a core faculty member in the MFA in Theatre program at Stony Brook Southampton since 2012, has been awarded the 2014 Pulitzer Prize for Drama for her play The Flick. The drama award, which includes a $10,000 prize, is “for a distinguished play by an American author, preferably original in its source and dealing with American life,” according to the official guidelines. The Columbia University prize board said Baker’s play was “a hilarious and heart-rending cry for authenticity in a fast-changing world.

Stony Brook Reaffirmed by Middle States; commended for Self-Study – As a member of the Middle States Association (MSA), Stony Brook University is accredited according to the guidelines and standards set forth by the MSA, Commission on Higher Education (CHE), and subject to a self-study and peer review on a decennial basis. At its June 26 meeting, the Middle States Commission on Higher Education reaffirmed its accreditation and commended Stony Brook on the self-study process and report.

$10M DOE Grant for New Energy Frontier Research Center – Esther Takeuchi, PhD, who holds a joint appointment in the Department of Chemistry and the Department of Materials Science and Engineering at Stony Brook University and is Chief Scientist in Brookhaven National Laboratory’s Global and Regional Solutions Directorate, was selected to receive a $10 million Energy Frontier Research Center (EFRC) award.

10 Surgeries Result in New Face and Smile for Girl from Kenya – After one year in the United States and 10 reconstructive surgeries at Stony Brook Children’s Hospital, Saline Atieno, a 12-year-old Kenyan girl, has returned home in June with a transformed face, a new ability to smile, and a future with promise. Dr. Alex Dagum, Chief of Plastic and Reconstructive Surgery Division at Stony Brook Medicine, led a team through the 10 surgeries which involved major reconstructions of Saline’s lips, mouth and nose. A hole in her face was sealed, and Dr. Dagum created a palate that separated her oral and nasal cavities so Saline could eat and speak normally again.

Wolfstock Celebrates Junior Welterweight Champion Chris Algieri as Alumni Fan of the Game – For the first time since graduating with a BS in Health Care Management in 2007, undefeated WBO junior welterweight champion, Chris Algieri returned to his alma mater for Stony Brook’s homecoming football game and Wolfstock Festival, where he was recognized by the Stony Brook University Alumni Association as Alumnus Fan of the Game. During halftime, Algieri returned to mid-field to present a replica of his WBO Jr. Welterweight Championship belt to his alma mater, which Dr. Stanley accepted on behalf of the University. He also announced that he is establishing the “Chris Algieri Championship Lifestyle Scholarship” at Stony Brook.

University Growth: New Facilities and Construction Projects enhance programs and services – Stony Brook continues to invest in buildings and facilities to enhance the academic experience and quality of life experience for students, faculty, staff and for the community. The milestones in 2014 were marked by cutting the ribbon on the newly renovated 4,000 seat Arena, a $23 Million West Side Dining Renovation project and the Refurbished Recreation Fields; and, by breaking ground on the New Residence Halls & Dining Facility and Stony Brook Children’s Hospital.