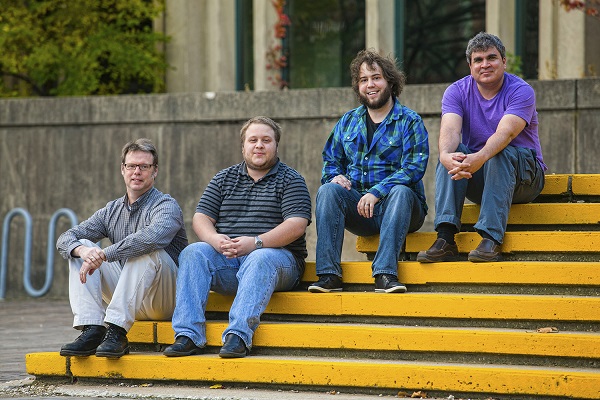 Stony Brook, NY – November 17, 2014 – A team of Stony Brook University researchers has been awarded 50 million hours on the Titan Cray XK7 at Oak Ridge National Laboratory, one of the world’s fastest supercomputers, to advance their research on modeling of astrophysical explosions. The two-year project,  titled, “Approaching Exascale Models of Astrophysical Explosions,” led by Astronomy Professor Michael Zingale in the Department of Physics and Astronomy, stems from the U.S. Department of Energy’s Innovative and Novel Computational Impact on Theory and Experiment award (INCITE), which provides the supercomputing hours.

The team is carrying out a comprehensive study of two classes of thermonuclear-powered stellar explosions involving compact objects, type Ia supernovae (SNe Ia) and X-ray bursts (XRBs). Key to their analysis is use of two multiphysics simulation codes, Maestro and Castro, which are specifically designed for the efficient modeling of astrophysical explosions.

“The team’s primary goal of the project, will be to explore a variety of initial configurations of stellar explosions in the densest stellar objects in the Universe,” said Zingale.

Zingale and former SBU graduate student Chris Malone (now at Los Alamos National Laboratory) will explore X-ray bursts, the explosion of surface hydrogen and helium on the surface of a neutron star—a star more massive than our Sun but only 10 kilometers in radius.

The team’s award of 50 million computer hours is the equivalent of running calculations on 5,000 processors simultaneously for an entire year. The team will run a variety of simulations during the research, the largest of which will require computing on more than 100,000 processors simultaneously. The computer time will support several graduate student projects, including that of Adam Jacobs, who is exploring ignition in helium shells on the surface of dense stellar remnants and Max Katz, who is modeling the merger of two dense stellar remnants. The time will also support the research of another graduate student, Don Willcox, who recently joined the group. He will be working on the role of convection and the weak nuclear force in progenitor white dwarfs.

“This award will allow us to perform simulations with unprecedented realism to address these fascinating events. It is a great opportunity to advance our understanding of how these things work.” said Co-investigator Professor Alan Calder, a member of the Astronomy Group and the Institute for Advanced Computational Science at Stony Brook.

“This new INCITE award is a tremendous accomplishment for Profs. Zingale and Calder and their team; it will enable the advancement of knowledge in one of the most cutting-edge areas of astrophysics,” said Stony Brook University President Samuel L. Stanley Jr., M.D. “It is remarkable how the U.S. Department of Energy’s Office of Science is advancing this field with the important designation of supercomputing time, and Stony Brook University is proud to be able to provide such an opportunity for our faculty and students.”

Professor Zingale has received supercomputer hour time from the INCITE program since 2007, and Professor Calder has been part of four different INCITE awards with different collaborations.

Additional Co-Investigators on the project include Ann Almgren and John Bell from Lawrence Berkeley National Laboratory; Chris Malone from Los Alamos National Laboratory; Dan Kasen from University of California Berkeley; and Stan Woosley from University of California Santa Cruz. The entire team has worked on these models and developed simulation codes for about a decade.

The INCITE program promotes transformational advances in science and technology through large allocations of time on state-of-the-art supercomputers the U.S. Department of Energy’s leadership computing facilities at Oak Ridge and Argonne National Laboratories. Open to researchers from academia, government labs, and industry, the INCITE program aims to accelerate scientific discoveries and technological innovations that address “grand challenges” in science and engineering.