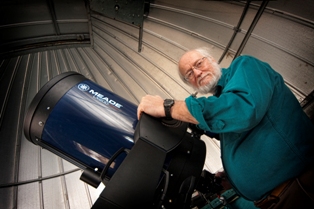 STONY BROOK, NY, November 7, 2014 – SUNY Distinguished Professor James Lattimer has been selected to receive the prestigious Hans A. Bethe prize, which is sponsored by the American Physical Society (APS). Professor Lattimer is a member of the Astronomy Group in the Department of Physics and Astronomy.

According to the APS, Lattimer was selected, “For outstanding theoretical work connecting observations of supernovae and neutron stars with neutrino emission and the equation of state of matter beyond nuclear density.“

“Dr. Lattimer’s 35-year career has earned him widespread recognition for his work which lies at the interface of nuclear physics and astrophysics,” said Dennis N. Assanis, Provost and Senior Vice President for Academic Affairs. “Lattimer, one of the most internationally renowned researchers in the area of using neutron star observations to set limits on the equation of state of nuclear matter, is well-deserving of this prestigious recognition.”

The prestigious award is given annually by the American Physical Society to “recognize outstanding work in theory, experiment or observation in the areas of astrophysics, nuclear physics, nuclear astrophysics, or closely related fields.” The prize, established to honor Hans A. Bethe, a renowned nuclear physicist at Cornell University, consists of $10,000 and a certificate citing the contributions made by the recipient.