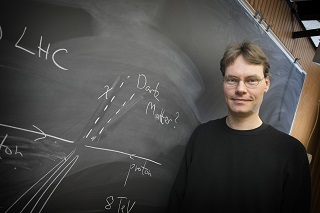 STONY BROOK, NY, November 7, 2014 –
Rouven Essig, PhD, an assistant professor at the C.N. Yang Institute for Theoretical Physics and the Department of Physics and Astronomy at Stony Brook University, has been selected to receive the 2015 Henry Primakoff Award for Early-Career Particle Physics which is sponsored by the American Physical Society.

According to the APS, Essig was selected, “For seminal contributions to theoretical models of dark matter with new gauge interactions, and for leadership of the APEX experiment at the Jefferson Laboratory.”

“Rouven Essig is, nationally, one of the most promising junior faculty in the field of particle physics,” said Dennis N. Assanis, Provost and Senior Vice President for Academic Affairs at Stony Brook University. “The unusually broad scope of his research program, which encompasses all three of the Cosmic, Energy and Intensity frontiers that take center stage of the U.S. program in particle physics, is also the reason that he received the prestigious DOE Early Career Award in 2012.”

The Primakoff Award was established to recognize outstanding contributions made by physicists who are just beginning their careers, and to help promote the careers of exceptionally promising young physicists. The prize is given annually and consists of $1,500 and a certificate citing the contributions of the recipient, plus an allowance for travel to an APS meeting to receive the award and deliver an invited lecture.

Essig earned his undergraduate degree in Physics (2001) and Mathematics (2002) from the University of the Witwatersrand in South Africa, and his PhD from Rutgers University in 2008. He was a postdoctoral research associate at the SLAC National Accelerator Laboratory from 2008-2011.

He is a 2012 recipient of the Department of Energy’s Early Career Award and a 2013 Alfred P. Sloan Research Fellow. He is a member of the APS divisions of particles and fields and astrophysics.