People Change Their Moral Values to Benefit Themselves Over Others 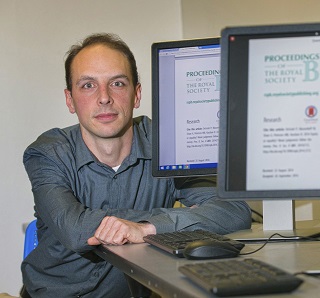 People Change Their Moral Values to Benefit Themselves Over Others

Stony Brook, NY – October 31, 2014 – According to an old adage, if someone tells you “it’s not about the money but the principle,” chances are it is about the money. A new study published in the
Proceedings of the Royal Society B
finds that people are quick to change their moral values depending on which rule means more cash for them instead of others.

The study, titled “Equity or equality? Moral judgments follow the money,” was conducted by Peter DeScioli, an Assistant Professor in Department of Political Science at Stony Brook University and Associate Director of the Center for Behavioral Political Economy, and colleagues.

“Previous research emphasizes people’s personalities, genes, and upbringing as the main source of moral values and disagreements about morality,” said DeScioli. “We found that people also adjust their moral values depending on which principle benefits them the most. Our moral principles are more flexible and self-serving than we would like to admit.”

The Typist could divide the money evenly, 50% each, or according to the work each person did, 75% for the Typist who transcribed three paragraphs and 25% for the Checker who transcribed one paragraph. Most Typists in this situation took the larger share of the pie, consistent with self-interest.

But it wasn’t only the Typists’ choices that were self-interested. Participants also rated the morality and fairness of each division rule: equality (equal payoffs) or equity (payoffs proportional to work). These moral judgments, too, were self-interested. Participants assigned to be Typists thought equity was more fair and moral, whereas participants assigned to be Checkers thought equality was more fair and moral.

Moreover, when the researchers measured moral values before and after participants were assigned to roles, people were caught in the act: Their moral values changed in a few minutes to favor the rule that gave them a larger share of the money.

DeScioli points out that the finding translates to many situations in which people need to divvy up resources such as family members dividing an estate, business partners dividing profits, citizens deciding how tax dollars will be spent, or nations dividing territory.

“Our selfishness does, however, have some limits,” emphasized DeScioli.

In the last experiment, the researchers removed the justification for an unequal division by asking both partners to transcribe one paragraph. In this scenario, most Typists (78%) shared the reward equally rather than taking the larger share. And, Typists no longer shifted their moral judgments in the self-interested direction.

The researchers conclude that the “Pursuit of self-interest is tempered, however, by the constraints of coordination. People seek not only to benefit themselves but also to persuade other people that they are morally right in doing so.”