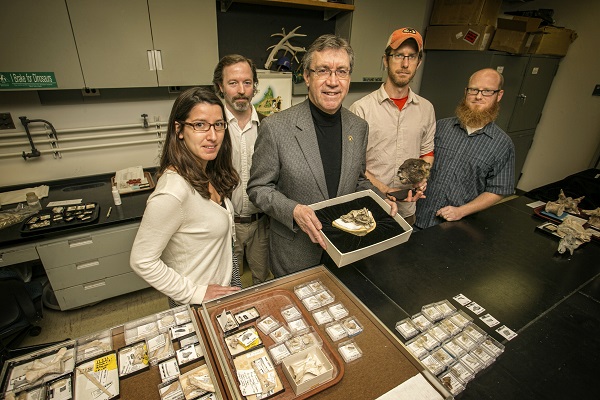 STONY BROOK, N.Y., November 5, 2014 – A newly discovered 66–70 million-year-old groundhog-like creature, massive in size compared to other mammals of its era, provides new and important insights into early mammalian evolution. Stony Brook University paleontologist David Krause, PhD, led the research team that unexpectedly discovered a nearly complete cranium of the mammal, which lived alongside Late Cretaceous dinosaurs in Madagascar. The findings, which shake up current views on the mammalian evolutionary tree, will be published in the journal Nature on November 5.

See more about Vintana in this Stony Brook video.

“We know next to nothing about early mammalian evolution on the southern continents,” said Dr. Krause, a SUNY Distinguished Service Professor in the Department of Anatomical Sciences at Stony Brook. “This discovery, from a time and an area of the world that are very poorly sampled, underscores how very little we know. No paleontologist could have come close to predicting the odd mix of anatomical features that this cranium exhibits.”

The new fossil mammal is named Vintana sertichi. Vintana belongs to a group of early mammals known as gondwanatherians, which previously were known only from isolated teeth and a few scrappy jaw fragments. The well-preserved skull allows the first clear insight into the life habits and relationships of gondwanatherians.

“The discovery of Vintana will likely stir up the pot,” added Krause. “Including it in our analyses reshapes some major branches of the ‘family tree’ of early mammals, grouping gondwanatherians with other taxa that have been very difficult to place in the past.”

The skull is huge, measuring almost five inches long, twice the size of the previously largest known mammalian skull from the entire Age of Dinosaurs of the southern supercontinent of Gondwana. At a time when the vast majority of mammals were shrew- or mouse-sized, living in the shadows of dinosaurs, Vintana was a super heavyweight, estimated to have had a body mass of about 20 pounds, twice or even three times the size of an adult groundhog. Adding to the intrigue is the fact that the cranium of Vintana has a peculiar shape, being very deep, with huge eye-sockets, and long, scimitar-shaped flanges for the attachment of massive chewing muscles.

The initial discovery was made in 2010 and, like many in science, came about by chance.