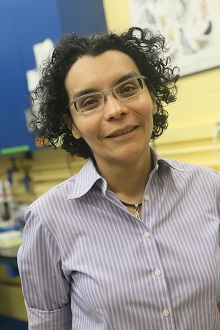 Professor Liliana M. Dávalos to research how bats sense their environment, other bats

Stony Brook, NY, September 16, 2014 – Liliana M. Dávalos, PhD, Assistant Professor in the Department of Ecology and Evolution at Stony Brook University and colleagues internationally have received a $1.91-million Dimensions of Biodiversity grant from the National Science Foundation (NSF) to discover how bats sense their environment and other individuals, including potential mates, thus ensuring survival and reproduction.

The Dimensions of Biodiversity program of the NSF seeks to fill the most substantial gaps in our understanding of the diversity of life on Earth, ahead of rapid and irreversible biodiversity loss. The NSF funding for the Stony Brook-led project takes effect September 15, 2014, and lasts for five years.

“We want to understand how special sensory capabilities have contributed to the diversity of bats, to the different foods the bats can find, and the ways they find mates,” said Professor Dávalos, the Principal Investigator of the project. “Evolving sensory structures that let a bat find flowers or fruit can be very advantageous. Our goal is to discover the mechanisms that are behind this biodiversity and understand how intrinsic characteristics shape interactions with mutualistic plants and with insect prey.”

Working toward this goal brings up key questions, such as:  Can these changes explain why there are so many species? How do species with different sensory specializations compare in their genome and anatomy? Why do we not see several specialized senses in a single species?

Dr. Dávalos and the multidisciplinary team of investigators are focusing on three biological dimensions: the gene repertoires associated with sensory systems, the molecular and cellular processes that generate special sensory structures in embryos, and the way space is allocated to different sensory structures in the head.

The bats belong to the group of bats of the New World that includes vampire and fishing bats, as well as fig-eating and nectar-feeding bats. The more than 250 species in this group have evolved a wide range of adaptations to multiple sensory challenges, making it one of the most ecologically diverse among mammals. These adaptations include special echolocation to detect insect prey against a background of leaves in the forest, ultraviolet light perception, different kinds of olfactory receptors to detect fruit in darkness, and the use of chemical receptors to communicate sexual and social status that is found in many other mammals but is unique among bats.

“This project integrates multiple disciplines to answer questions that evolutionary biologists have been posing for decades,” said Betsy Dumont, PhD, “It combines science at the frontier of molecular biology and imaging techniques with basic knowledge on the natural history of the bats to shed light on the most intimate mechanisms that generate evolutionary novelties and open up new niches.”

According to Karen Sears, PhD, University of Illinois Assistant Professor of Biology: “The tools necessary to conduct these types of studies are only now becoming standard for organisms that are not typically maintained in laboratories. This new toolkit will allow us to not only track the development of sensory organs, but also to test the action of key genes in the lab. The potential to discover mechanisms relevant to many other species and not just bats is unprecedented.”

“We know the sensory genes of species with different specializations differ in important ways,” said Stephen Rossiter, Ph.D., Queen Mary University Senior Lecturer and Royal Society University Research Fellow. “The broad scope across so many species and the ability to characterize thousands of genes for each one has the potential for major breakthroughs: it will allow us to carefully measure the impact of these genetic changes on the ecological diversity and the number of species that evolve over time.”

“It takes a team,” said Dávalos. “The toolkit necessary to answer all of our questions is not found in a single laboratory, or even a single institution.”

The international team will soon be joined by two new doctoral students and one new post-doctoral researcher. The doctoral students will be charged with collecting genome and anatomical data for about 250 species of bats across the tropical Americas over the first two years of the grant. The postdoctoral researcher will spearhead laboratory assays to characterize molecular and cellular processes in developing bat embryos.