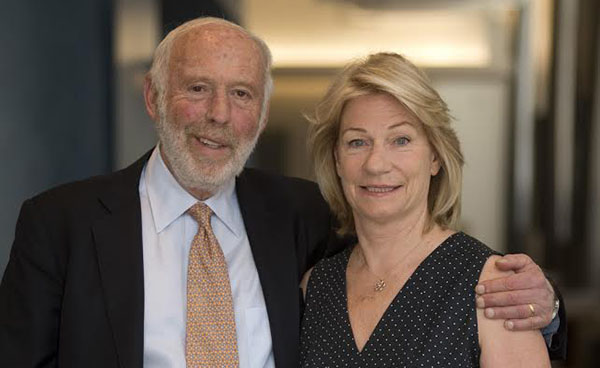 The Simons Center has now received $105 million in contributions from the Simons Foundation and its co-founders, Drs. Jim and Marilyn Simons ’84.

Since its opening in 2011, the Simons Center has given the world’s top mathematicians and physicists the opportunity to interact in an environment specifically designed to enhance progress. Some 1,200 visiting scholars– a blend of senior visionaries and up and coming young physicists and geometers – participate in dozens of workshops and programs each year at the Simons Center.

Dr. Stanley said the Simons’ most recent gift will buoy the Center’s investigation of string theory, its quest to quantify gravity and its search for a better understanding of the fundamental nature of the universe.

“We are privileged that Jim and Marilyn decided to create the Simons Center at Stony Brook,” he said.  “The Center has become a magnet for the world’s greatest minds in physics and geometry, elevating the prestige of Stony Brook’s mathematics and physics departments, as well as the entire University.”

Jim Simons, a world-renowned mathematician who as Chair built Stony Brook’s Mathematics Department into one of the best in the nation, agreed that work accomplished at the Simons Center may significantly change the world’s understanding of the physical universe and of its basic mathematical structure.

“Throughout history, much of the most important work in physics – from Archimedes to Newton to Einstein – has been deeply intertwined with the geometric side of mathematics,” Jim Simons said. “With the advent of such areas as quantum field theory and string theory, developments in geometry and physics have become if anything more interrelated.”

If there’s one constant the Simons Center for Geometry and Physics counts on for success, it’s the knowledge that great minds do not always think alike. The Center encourages mathematicians and physicists to exchange ideas and work across the divide that separates their disciplines.

“Bringing accomplished minds together and finding connections between two domains in any science opens windows of opportunity for both fields to benefit,” said Dr. Nikita Nekrasov, a physics professor and permanent faculty member at the Simons Center.

Simons Center Director John Morgan said the Center makes the University an increasingly attractive place to come for intellectual reasons, and that the quality of applicants seeking math and physics faculty positions at Stony Brook has increased dramatically, along with the caliber of graduate school applicants.

“The Simons Center is a research center where leading mathematicians and physicists from around the world come together to discuss important questions at the interface of their subjects, to learn from each other, and to work collaboratively,” Morgan said.  “Interactions between scientists with different perspectives lead to progress that would be difficult, if not impossible, without the environment engendered by the Center. These interactions also create a vibrant and stimulating intellectual atmosphere here, adding to Stony Brook’s attractiveness to prospective students and faculty in math and physics.”