Seeds of Hope for Shinnecock Bay 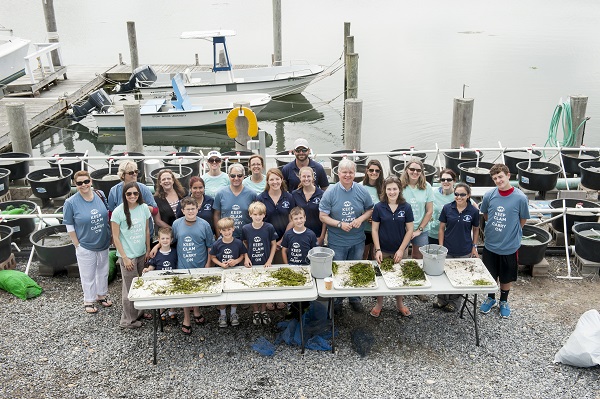 Seeds of Hope for Shinnecock Bay

SOUTHAMPTON, NY, June 18, 2014 – On Saturday, June 14, East End volunteers worked side-by-side with members of the Stony Brook University School of Marine and Atmospheric Sciences, (SoMAS) to help revitalize Shinnecock Bay. More than 40 residents, friends and neighbors were on hand at this second annual event to help improve the Bay’s condition by restoring eelgrass habitat into areas where it has disappeared.

“Although the problems occurring in the Bay can seem overwhelming — from algal blooms such as brown tides to vanishing shellfish populations — the Shinnecock Bay Restoration Program (ShiRP) is working toward solutions. It is something that the community can get involved with and make a positive impact,” said Christine Santora, Program Coordinator for ShiRP. The restoration location and method was chosen based on research done by Bradley Peterson, Associate Professor at SoMAS, who has a long history of studying the eelgrass ecology. Shellfish and other marine life depend on this habitat for growth and survival. “It was encouraging to see so many volunteers assisting Stony Brook University researchers in their efforts to help restore eelgrass in Shinnecock Bay,” said Assemblyman Fred W. Thiele Jr. (Sag Harbor) who also pitched in at the event. “Efforts like these will help to restore the ecosystem functions and economic value of our local bays.”

The event occurred in three phases. The first phase was harvesting adult reproductive eelgrass shoots from the bay by Peterson and his team. Next, volunteers separated thousands of eelgrass shoots in water-filled tubs, looking at each individual piece for seeds. The fertile ones were piled into mesh bags, which were then tied mid-line to a cord, anchored by a cinder block and affixed with a buoy at the top for identification. Last, the bags were brought out in to the Shinnecock Bay and installed at various drop points. The Buoy-Deployed Seeding System (BuDS), originally developed by the Cornell Cooperative Extension, will allow the seeds to be dispersed in mid-water and offer the greatest chances for success.

The group handled 8,200 reproductive shoots, each containing roughly 50 seeds, for a total of approximately 410,000 seeds being dispersed this season. “We’re doing our best to combat problems in Shinnecock Bay and restore it to a place with clean water and healthy marine life,” said Santora. With the help of the local community, the bay will be one step closer to being a more vibrant habitat.