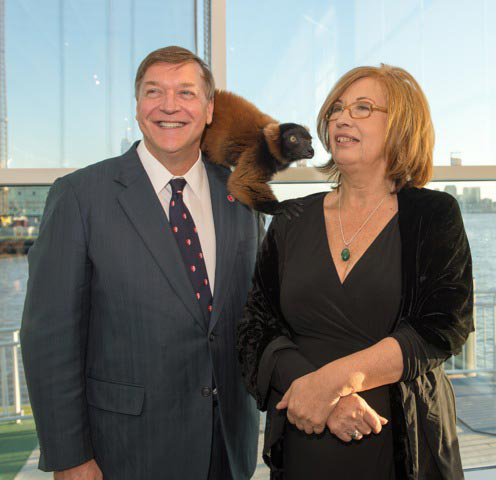 Professor Feted by A-Listers at Event and in Video Testimonial Including
Morgan Freeman, Richard Branson and Drew Fellman

Stony Brook, NY, April 17, 2014 – On Wednesday, April 16, 2014, in New York City, Stony Brook University honored one of its own, long-time conservationist and lemur expert Dr. Patricia C. Wright at its 15th annual Stars of Stony Brook Gala 2014.  On top of being feted by her University, Dr. Wright was also riding the wave of stardom as her work with lemurs is the central storyline of the new IMAX® documentary Island of Lemurs: Madagascar.
As a continuing tradition, Stony Brook University also recognized six young scholars at the gala for their academic talent and ambition.

A recipient of the MacArthur “Genius Award” and finalist for the 2014 Indianapolis Conservation Prize, Dr. Wright was honored for her major contributions in the biology, ecology, conservation and behavior of living primates.  She has also been instrumental in helping both indigenous people and the international community better understand the value of conservation in Madagascar and around the world.  Through the research station she created there known as Centre ValBio, Dr. Wright has continued to deliver her expert knowledge and support to help both the wildlife and residents of this region.

“I feel incredibly humbled and grateful to have been honored by Stony Brook University,” said Dr. Patricia C. Wright.  “It was wonderful to be surrounded by such inspiring colleagues and especially the students.  Also, can’t forget how nice it was to see the beautiful lemurs in NYC – lemurs are such wonderful animals.”

In its 15-year history, the Stars of Stony Brook Gala has raised over $37 million to support student scholarships and various hands-on research programs.  The gala was also attended by over thirty high-achieving students, six of which were particularly highlighted that evening including, Fanny Cornejo Fernandez (class of ’17), James Leonard (class of ’15),Olivia Sanchez (class of ’15), Neha Kinariwalla (class of ’14), Joshua Mason (class of ’14), and Ali Syed (class of ’14).  These students have gone and continue to go above and beyond to reach their educational goals through the University’s dynamic and excellent programs.

One of the six student stars recognized Wednesday evening, Neha Kinariwalla, has also spent her time in Madagascar as a volunteer at Dr. Wright’s own Ranomafana National Park.  Neha Kinariwalla is majoring in sociology and was recently named a Gates Cambridge Scholar.  She is enrolled in Stony Brook’s Scholars for Medicine program and has participated in several global health initiatives.  When asked about the opportunities she’s been able to achieve thanks to Stony Brook’s generous donations, Neha had this to say, “thanks to the University’s generosity, I feel empowered and strong, as my mind is able to expand through a diversified and excellent education.”  Upon graduating, Neha also plans to pursue a career in pediatric neurology.

Also recognized at the gala was the Global Health Institute in Madagascar.  As a result of Dr. Wright’s work, Stony Brook University is more invested than ever in her mission there.  Along with the Centre ValBio research center, the University has also teamed up with scientists/husband and wife duo, Jim and Robin Herrnstein, to establish the Global Health Institute. The Institute will drive cutting-edge health research in the region while working closely with a new nongovernmental organization.

The Stars of Stony Brook Gala has been able to bring together stars from Hollywood, the arts and academia, including Alan Alda, Ed Harris, Julie Andrews and now this years’ Dr. Patricia C. Wright, as spokespersons for various scholarships and charities. Morgan Freeman, Academy Award® winner and narrator of IMAX documentary “Island of Lemurs: Madagascar,”Drew Fellman, writer and producer of IMAX documentary “Island of Lemurs: Madagascar” and Richard Branson, founder of Virgin Group also appeared in a testimonial video honoring Dr. Wright at the gala.