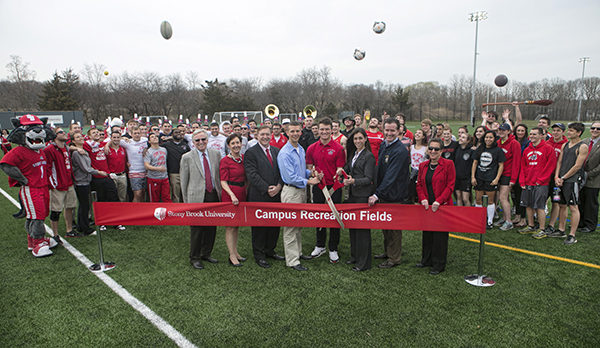 STONY BROOK, NY, April 16, 2014 – Stony Brook University celebrated the opening of its newly renovated Campus Recreation Field Complex with a ribbon-cutting ceremony at the southeast corner of the South P parking area of the campus. Stony Brook University students will have primary use of the three competition size turf and grass fields which measure over nine square acres and include lights for evening practice and competition.

Stony Brook University now provides double the amount of recreational field space previously available to students prior to refurbishment. Fields A and B are both fitted with lighting and bleacher and bench seating and fields A, B and C have netting to prevent balls from leaving the fields.

“It is important that the university provide recreational facilities indoor and outdoor for our student clubs to practice and compete,” said Dr. Stanley.  “Stony Brook is committed to the total well-being of our students and by providing access to quality, contemporary and modern facilities, we are able to achieve these goals. On behalf of our students, I want to thank Senator Flanagan who was able to identify and secure more than $100,000 in funding to make these field upgrades possible.”

Student Clubs that will use the fields include but are not limited to men’s and women’s soccer, lacrosse and rugby and co-ed sports including ultimate Frisbee, Quiddich as well as archery and cricket. Field use scheduling requests for the intramural competition-quality fields are available on the Stony Brook University Campus Recreation website.

“These new recreational facilities will significantly enhance the quality of life for Stony Brook students while also helping to attract prospective students to the Stony Brook campus,” stated Sen. Flanagan. “I congratulate everyone who was involved in bringing this dream to reality and hope that all students who call SBU home enjoy these new fields.”

“What made this effective was not the individual sports clubs, student government or student body working on this project independently but by joining together with the University’s administration,” said Matthew Graham.  “Both parties made it possible and successful.”