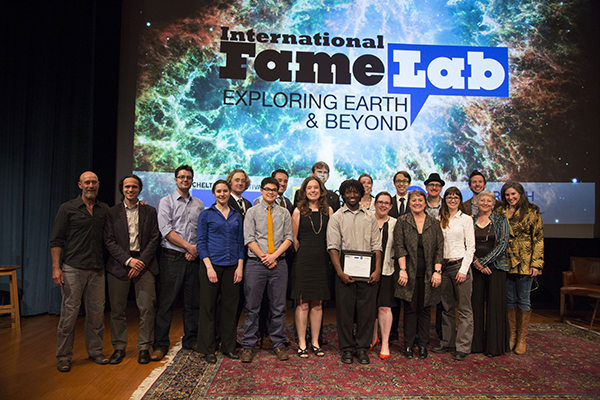 STONY BROOK, NY, April 9, 2014 – Lyl Tomlinson, a PhD candidate in Neuroscience at Stony Brook University, has won the National Famelab USA competition, a contest that challenges young scientists to talk about their research engagingly for a general audience.

Tomlinson, 25, a Brooklyn College graduate, won out over nearly 100 early career scientists from across the county who participated in six regional heats over the last 18 months.  In June, Tomlinson will advance to represent the United States at the FameLab International Final in England, competing against the winners of FameLab competitions in 23 other countries. The contest is sponsored by NASA, National Geographic, and the Cheltenham Science Festival.

Following the award ceremony, Tomlinson said, “It was exciting from the very beginning developing my talk with critical feedback from the Alan Alda Center for Communicating Science. My excitement only grew while I refined my skills in the FameLab master class, into the final when I presented on stage with other engaging science communicators. I am thrilled to be participating again in June.”

“We are very proud of Lyl for this great achievement. He is a talented, dedicated scientist who understands how important it is for scientists to be able to connect with a wide range of people,” said Elizabeth Bass, director of the Alan Alda Center for Communicating Science at Stony Brook.

At the FameLab USA finals, held April 5 in Washington, DC, Tomlinson was one of 11 finalists competing for the US title. Tomlinson’s winning presentation, “A Few Steps to a Better Memory,” was about his dual passions — running and the brain.

Tomlinson’s research suggests a link between running and a boost in stem cell production in the hippocampus, one of the areas of the brain responsible for memory.  In a short three minutes, he described his research showing that mice who run on exercise wheels remember simple tasks better and have more stem cell production than their couch potato counterparts.  One highlight of the question period following the talk occurred when Lyl was asked if the research might mean that any exercise, like yoga, could be of benefit.  Not missing a beat, Tomlinson shot back, “We haven’t really found that yoga might stimulate stem cells — mostly because it’s really hard to get mice to assume yoga positions.”

A native of Brooklyn, NY, Tomlinson earned his B.S. in psychology from Brooklyn College, and later pursued his interests in neuroscience at Downstate Medical Center. He is currently working towards a PhD in neuroscience in Dr. Holly Colognato’s lab at Stony Brook.

To watch the full livestream of the competition, click http://new.livestream.com/viewnow/famelab