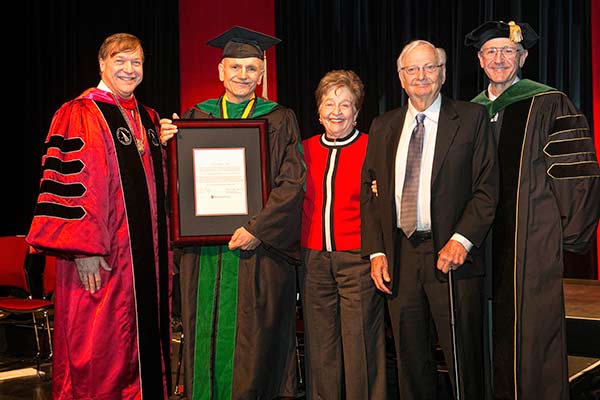 “I am delighted to invest Dr. Yusuf Hannun as the Joel Strum Kenny Professor in Cancer Research,” said Samuel L. Stanley Jr. MD, Stony Brook University President. “Dr. Hannun has made a huge mark on medicine as a researcher and educator and truly epitomizes the standard for an endowed professor. He has contributed to more than 500 scholarly publications with a remarkable impact factor, as 110 of his papers have been cited at least 110 times worldwide.”

Endowed faculty positions are a hallmark of leading universities, the highest academic honor for faculty, and a lasting tribute to the donors who establish them. Dr. Hannun becomes the eighth officially invested member of Stony Brook’s endowed faculty.

“Dr. Yusuf Hannun brings a world of experience and insight as the Joel Strum Kenny Professor in Cancer Research,” said Kenneth Kaushansky, MD, Senior Vice President of the Health Sciences and Dean of the School of Medicine. “He is a renowned physician-scientist whose research focuses on the lipid mediators of cancer cell signaling. His work has profoundly impacted cancer research, as well as research in neurobiology, inflammation and metabolism.”

In his position, Dr. Hannun will build on the Cancer Center’s existing strengths. He will expand clinical programs, more fully integrate research with clinical care, recruit new physicians and cancer investigators, spearhead facility expansion, and use his knowledge and experience to transform the Center into a basic and translational research hub.

“I am deeply honored to receive the Joel Strum Kenny Professorship in Cancer Research and am indebted to the many donors who created this endowed position,” said Dr. Hannun, who is also Vice Dean of Cancer Medicine. “Stony Brook Medicine is undergoing a renaissance in its renewed focus on academic medicine, and we must deliver on our promise to innovate from bench to bedside.”

“All of us in the Cancer Center are committed wholly and completely to create medicines of the future that better treat and cure many forms of cancer,” Dr. Hannun added. “We embrace this challenge in a difficult time when the federal government has scaled down funding to support cutting-edge research. How wonderful it is know that our donors have the vision and generosity to make our vital work possible.”

In a special tribute to Joel Strum Kenny, President Stanley and Dr. Kaushansky presented Shirley Strum Kenny with flowers and a certificate to her and her husband, Robert Kenny, to commemorate their son’s life and legacy.

They also recognized the donors who generously created the Joel Strum Kenny Professorship in Cancer Research, including Priscilla Knapp and the Knapp family, the Simons Foundation, Erwin and Pearl Staller, unanimous support from the Stony Brook Foundation Board of Trustees, and the Kenny family.

About Dr. Yusuf A. Hannun

Dr. Hannun’s career has spanned more than 30-year career as a cancer researcher and clinician.

Before coming to Stony Brook in 2012, he rose through the ranks at Duke University Medical Center and was subsequently recruited by the Medical University of South Carolina (MUSC), where he became Deputy Director of MUSC’s Hollins Cancer Center. His decade of leadership there led to the Center’s emergence as a NCI-designated Cancer Center in 2009.