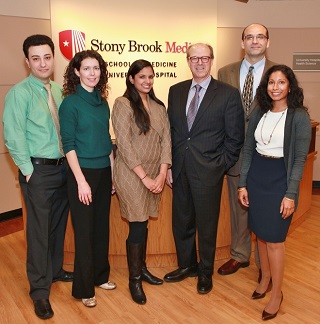 STONY BROOK, N.Y., February 4, 2014 – A $254,000 bequest from the estate of Drs. Robert and Olga Von Tauber will encourage research and innovation by fourth-year residents and fellows in the Department of Psychiatry and Behavioral Science at Stony Brook University School of Medicine. The endowment created by the Robert Von Tauber and Olga Von Tauber Fund will enable them to present their research findings at national meetings, and it will also supplement a newly established research tract for Psychiatry residents.

Robert Von Tauber, PhD, was a chemist who served as Honorary United States’ Consul in Haiti. Olga Von Tauber, MD, was a Viennese psychiatrist who emigrated to the U.S. in 1945. She practiced psychiatry on Long Island for 25 years, rising to the rank of Deputy Director of Kings Park Psychiatric Hospital then Director of the Northeast Nassau Psychiatric Hospital. After retirement, she joined the volunteer faculty of the Department of Psychiatry at Stony Brook.

“We are grateful for the Von Taubers for encouraging research and innovation in psychiatry, especially among young professionals who are poised to make important decisions about their careers,” said Ramin Parsey, MD, PhD, Chair of the Department of Psychiatry and Behavioral Science. “Presenting your research findings on a national stage can be a life-changing experience.”

“We will encourage residents and fellows to compete for this award and as an incentive to conduct quality research and scholarly work,” added Michael Schwartz, MD, Director of the Department’s Residency Training Program and a recipient of the 2013 American Psychiatric Association Irma Bland Award for Excellence in Teaching Residents.

The funds may be as used as early as the 2014 spring semester and will be fully incorporated into the Department’s 2014-15 academic year.