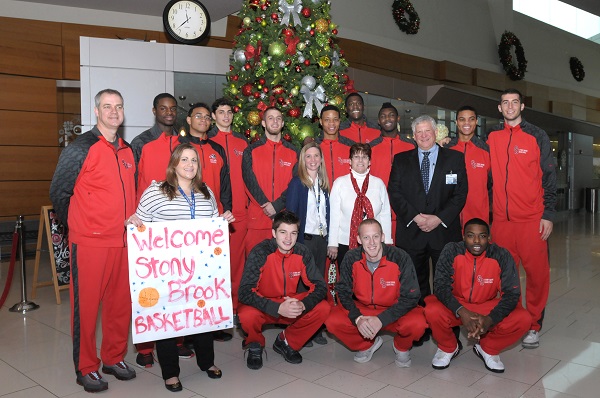 STONY BROOK, N.Y., December 10, 2013 – It’s usually team spirit that the Stony Brook University  Men’s Basketball team brings to the court each game, but during a special holiday visit to Stony Brook Children’s Hospital on Monday, December 9, there was a different type of spirit and cheer roaming the halls.

The team took a break from practice to come mingle with some of the youngest Seawolves fans in the pediatric emergency department, and pediatric acute care unit. With presents in hand, the players shot some hoops with these little patients, took photos and had some fun with the kids in the playroom. The team’s efforts brought exactly what they hoped for, smiling young faces and holiday joy.

During the team’s visit, coach Steve Pikiell presented L. Reuven Pasternak, MD, Chief Executive Officer, Stony Brook University Hospital and Vice President for Health Systems, Stony Brook Medicine, with a Stony Brook University Athletics ‘family-4-pack’ of tickets to each SBU Men’s Basketball home game to kids and their families who are currently admitted or who have been discharged from the Children’s Hospital. Coach Pikiell is no stranger to generous donations; he and his family donated $25,000 in May of 2012 to Stony Brook Children’s that was then matched by an anonymous donor, raising the value to $50,000.