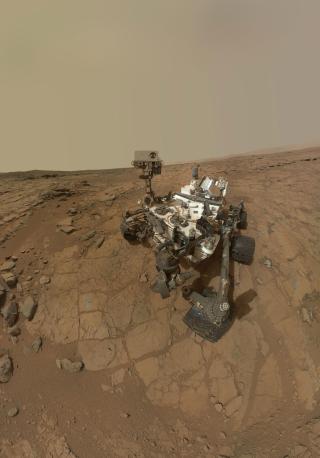 STONY BROOK, NY, December 9, 2013 – Humankind is by nature inquisitive, especially about the prospect of life on other planets and whether or not we are alone. The aptly named Curiosity, a NASA Mars rover, has been scouring that planet’s surface as a potential habitat for life, either past or present. Stony Brook Department of Geosciences professors Scott McLennan and Joel Hurowitz just revealed some exciting findings, as lead and co-authors of six papers that appeared in the December 9 online issue of Science.

“We have determined that the rocks preserved there represent an ancient geological environment that was habitable for microbial life,” says McLennan, who was selected as a Participating Scientist for the NASA Mars Science Laboratory rover mission. Adds Hurowitz, “Curiosity carried out the work in an area on Mars called Yellowknife Bay, within Gale crater. The rover fully characterized this environment in terms of its geological and geochemical relationships.”

This meticulous representation is crucial to understanding whether Mars was theoretically habitable. A major model of Martian history posits that the planet had fresh water to generate clay minerals—and possibly support life—more than 4 billion years ago, but experienced a drying phenomenon that changed the conditions to more acidic and briny. A key question about the clay minerals at Yellowknife Bay was whether they formed early in Martian history—up on the crater rim where the bits of rock originated—or later, down where the bits were carried by flowing water and deposited.

Professor McLennan and his co-authors determined that the chemical elements in the rocks indicate the particles were carried by rivers into Yellowknife Bay without experiencing much chemical weathering until sometime after they were deposited. If the weathering that turns some volcanic minerals into clay minerals had happened in the source regions where the sedimentary particles were generated, a loss of elements that readily dissolve in water—especially calcium and sodium—would be expected. The evidence indicates that did not occur, and that much of the geochemical “action” took place late in the history of the rocks found in Yellowknife Bay.

The clay-bearing Yellowknife Bay habitat, thought to be an ancient lakebed, consisted of water that was neither too acidic nor too salty, and had the right mix of elements to be an energy source for life. The energy source would have been similar to that used by many primitive rock-eating microbes on Earth—a mixture of sulfur- and iron-bearing minerals of the type that allow for the ready transfer of electrons, not unlike a simple battery.

“This demonstrates that the geological environments on early Mars were conducive for life,” McLennan says. “It justifies further investigations to determine if life actually existed on Mars. The age of these rocks is perhaps a little younger than thought was likely to contain such environments. This means that the current paradigm for the evolution of surface conditions on Mars may require some reinterpretation.”

The Mars Science Laboratory mission is part of NASA’s Mars Exploration Program for long-term robotic exploration of the red planet. The rover landed on August 5, 2012 in Gale Crater on Mars on a two-year primary mission. The four central objectives are to assess biological potential, characterize the geology of the landing region, investigate planetary processes that are relevant to past habitability—including the role of water, and describe the broad spectrum of surface radiation.

The record of the climate and geology of Mars is contained in the rock and soil formations, structure, and chemical composition. Curiosity scoops samples from the soil, drills them from rocks, and observes the geological and radiation environment around the rover. Its onboard laboratory ingests and analyzes the samples in an attempt to detect the chemical building blocks of life—especially different forms of carbon—and assess what the Martian surface environment was like in the past.

Hurowitz marvels at the remarkable state of preservation of these rocks, despite their great antiquity. “Finding ancient sedimentary rock that hasn’t been ‘chewed to pieces’ is exceedingly difficult to do on Earth,” he says. “But such rocks appear to be commonplace on Mars, making it an excellent target for understanding the early history of watery terrestrial planets in our Solar System and beyond.”

Curiosity is currently traversing over 5 miles from Yellowknife Bay to the base of Mount Sharp in the center of Gale crater, which has always been the prime target for the mission. “It is expected to arrive sometime in 2014, when it will begin the exploration of this 5 km high mountain that consists of layered rocks,” Hurowitz says.

During the first three months of the landed mission, Professors McLennan and Hurowitz worked out of the Jet Propulsion Laboratory in Pasadena, CA, where the science and engineering team operated the rover on “Mars time,” because a Martian day, or “sol,” is approximately 40 minutes longer than an Earth day. McLennan’s role is both as Participating Scientist and, operationally, as a Long Term Planning Lead.

Research Associate Professor Hurowitz is a Mars Science Laboratory Co-Investigator and also a Long Term Planning Lead. Hurowitz, co-author on all but one of the papers published in Science, was selected to be on the panel at the December 9 press conference—coordinated by the Jet Propulsion Laboratory and NASA, and held at the American Geophysical Union conference in San Francisco—where the findings were announced.

Both Hurowitz and McLennan are also science team members for the Mars Exploration Rovers Spirit and Opportunity that landed on Mars in 2004. Contact with the Spirit rover was lost in 2010, but Opportunity is still fit and currently exploring Endeavour Crater on the Meridiani Plains, over 5,000 miles to the west of where Curiosity is operating.

Their work highlights the fact that Stony Brook faculty working in the planetary sciences—Professors McLennan and Hurowitz working with Curiosity, and others such as Tim Glotch (planetary geology, remote sensing, Martian surface mineralogy), Deanne Rogers (planetary geology, remote sensing), and Hanna Nekvasil (planetary crustal evolution on Mars, Earth and the Moon)—are at the cutting edge of planetary science research, evaluating data returned from missions to Mars and the Moon and performing research in the laboratory.

Their research is also crucial for the openings it offers to eager researchers on the Stony Brook campus. Says McLennan, “This work provides unique opportunities for Stony Brook students and post-docs to be involved in such crucial planetary science undertakings.”