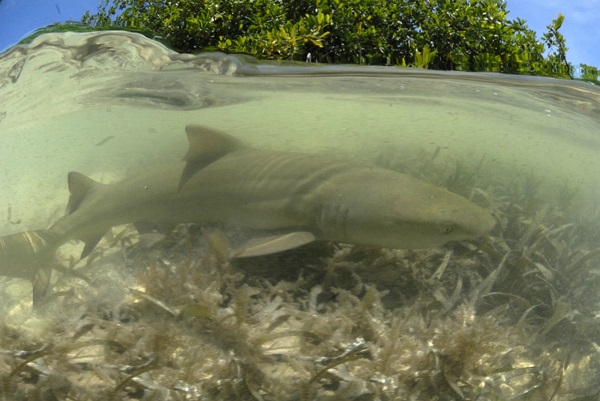 December 5, 2013–Research conducted in Bimini in The Bahamas spanning almost two decades shows that female lemon sharks that were born there returned 15 years later to give birth to their own young, confirming this behavior for the first time in sharks. The study began in 1995, and has resulted in the capture, tagging, and release of more than 2,000 baby sharks over the 19-year, ongoing project.

This article, published online today in the journal Molecular Ecology, entitled, “Two decades of genetic profiling yields first evidence of natal philopatry and long-term fidelity to parturition sites in sharks,” was a collaborative effort involving scientists from The Field Museum, Bimini Biological Field Station Foundation, University of Miami and Stony Brook University (SBU).  Results suggest that local and international efforts can make a big difference in the struggle to recover the world’s coastal shark populations. Sharks have been heavily exploited to supply the Asian restaurants and banquet halls with shark fins, the main ingredient in a highly prized soup of great cultural significance but of no nutritive value.

“We used each shark’s individual DNA fingerprint to construct a large family tree,” explained Dr. Kevin Feldheim, the A. Watson Armour III Manager of the Pritzker Laboratory for Molecular Systematics and Evolution at The Field Museum and the lead author of the study.

“We found that newborn sharks captured in the mid-1990s left the safety of the islands when they were between five and eight years old. Yet, despite leaving and visiting many other islands in their travels, these sharks ‘remember’ where they were born after a decade of roving, and are able to find the island again when they are pregnant and ready to give birth,” Dr. Feldheim added.

Many researchers had speculated that female sharks have this ability to home back to their birthplace to give birth, but it had never been proven because it is very difficult to keep track of sharks from birth to maturity. Many hundreds of student volunteers came to the Bahamas to help with the 19-year ongoing research effort to finally prove that the speculation was true. (See Video of shark giving birth. Credit: Duncan Brake)

“The lagoon in Bimini is almost like a lake,” said project founder Dr. Samuel Gruber, president and director of the Bimini Biological Field Station Foundation. “I realized that we had a chance to capture nearly every shark born into the lagoon  each year, and this gave us the unique opportunity to see if the females actually come back to give birth. However it took us nearly two decades and countless hours in the field and laboratory, but we finally answered this long-standing question and many others with this paper.”

Sharks live a long time and take many years to mature, which is one reason why they are extremely vulnerable to overfishing. Evidence that sharks utilize the same nursery areas across generations underscores the critical importance of preserving local nursery habitats and can provide strong input in designating inshore marine reserves that would protect sharks of future generations. The fact that some sharks are tightly connected to certain places as opposed to being ocean wanderers also indicates that individual countries or cooperative groups of neighboring countries can take action themselves to protect sharks that are, in a sense, theirs.

The study’s coauthor, Dr. Demian Chapman, assistant professor at the School of Marine and Atmospheric Sciences and assistant director for science at the Institute for Ocean Conservation Science at SBU, said he started out 17 years ago as a volunteer researcher at Bimini charged with catching sharks for tagging.

“When we tagged the first baby sharks in Bimini, Bill Clinton was President of the United States,” said Dr. Chapman. “When they started to mature and return to give birth, Barack Obama was President. If you think of all that has happened in the world over that period, just consider that is the amount of time it takes for many large sharks to reach maturity.”

Many nations have awakened to the threats posed to sharks by unregulated fishing. The Bahamas recently enacted a law to fully protect all sharks in its waters, which will, among other benefits, sustain an annual $80 million shark tourism industry. “National efforts to reign in the shark fishing industry by many countries are likely to benefit homing shark species, like lemon sharks,” added Dr. Chapman.

This research was supported by the National Science Foundation Biological

Oceanography Program, The Pew Charitable Trusts, and the Bimini Biological Field Station. Genetic data were collected in the Field Museum’s Pritzker Laboratory for Molecular Systematics and Evolution operated with support from the Pritzker Foundation.

For more information about the paper, “Two decades of genetic profiling yields first evidence of natal philopatry and long-term fidelity to parturition sites in sharks,” on or after Dec. 5, 2013, please go to: http://onlinelibrary.wiley.com/journal/10.1111/(ISSN)1365-294X/earlyview