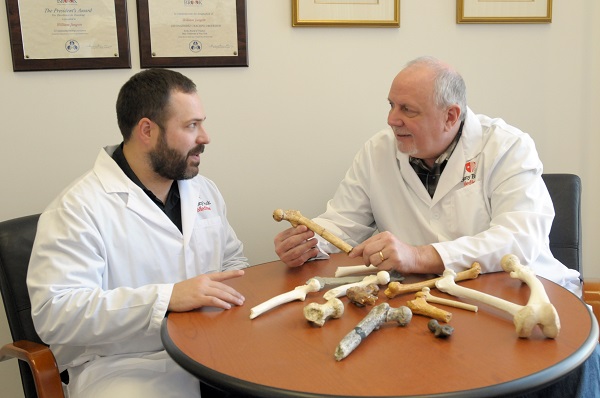 STONY BROOK, N.Y., December 4, 2013 – An analysis of the femur of one of the oldest human ancestors reveals the six-million-year-old “Millenium Man” was bipedal but lived in the trees. The research, led by Stony Brook University researchers and their team of international paleoanthropologists, could provide additional insight to the origins of human bipedalism and is published in Nature Communications.

In the research paper, titled “The femur of Orrorin tugenensis exhibits morphometric affinities with both Micoene apes and later hominins,” Lead Investigator Sergio Almécija, PhD, a Research Instructor from the Department of Anatomical Sciences at Stony Brook University School of Medicine, and co-authors clarify and contextualize Orrorin tugenensis, or Millenium Man’s place in human and ape evolution.

The team completed 3D geometric morphometric analyses on the shape and characteristics of the femur of Orrorin, which revealed its morphology to be an “intermediate” between fossil apes and later human ancestors (hominins). The findings opens a new avenue in bipedal evolution research as they illustrate that hominins and living apes evolved in different directions from fossil apes from the Miocene (23 to 5 million years ago).

Millenium Man is fossil from East Africa and considered to be one of the best candidate species for what may be called the earliest hominins. However, its hominin status has been questioned by some scientists. Miocene apes are fossil relatives of the ape-human lineage with body shapes somewhere in between living monkeys and apes. Most Miocene apes walked on their fours in the trees instead of suspending themselves below branches.

According to Dr. Almécija, their study for the first time compared the six-million-year-old Millenium Man femur (called BAR 1002’00) using state-of-the-art morphometric techniques to not only other available hominin fossils but also great apes, hylobatids (ie, gibbons and siamangs), and most importantly to fossil apes that lived in the Miocene. The analysis included more than 400 specimens.

“We discovered that Orrorin‘s femur is surprisingly ‘intermediate’ in both age and anatomy between quadrupedal Miocene apes and bipedal early human ancestors,” said Dr. Almécija. “Our paper provides quantitative results of the Orrorin femur as a unique mosaic and stresses the need to incorporate fossil apes into future analyses and discussions dealing with the evolution of human bipedalism, an investigation that should stop considering chimpanzees as default living ‘starting point’ models.”

A similar take-home message was derived from the extensive analyses of the postcranial skeleton of the 4.4 million-year-old Ardipithecus ramidus from Ethiopia.

Dr. Almécija explained that because chimpanzees are our closest living relatives in terms of molecular data, a majority of paleoanthropologists presume that the last common ancestor of chimpanzees and humans looked exactly like a chimpanzee. For that reason, Miocene apes have been largely ignored in the human origins scientific literature. Although chimpanzees and other great apes can still represent good ancestral models for other anatomical regions, this new study proves that it is not the case of the proximal femur.

Based on the 3D geometric morphometric analyses, the Orrorin femur is most similar overall to Miocene ape Proconsul nyanzae but also closely linked to Australopithecus afarensis (ie, “Lucy).

Regarding their technique and the overall findings, the authors wrote:

“Although the nature of our morphometric approaches differs from previous analyses, our results match and reinforce many of the conclusions from most previous analyses by showing subtle differences between australopiths and fossil Homo in terms of proximal femoral shape. Our results also agree that Orrorin shows an external femoral anatomy more similar to that of early hominins than that of modern humans. However, by virtue of adding earlier Miocene apes, our results expand previous conclusions reached on Orrorin by indicating the six-million-year-old  BAR 1002’00 femur is not modern human-like or intermediate between extant great apes and humans, but rather intermediate between more plesiomorphic fossil ape and Plio-Pleistocene hominins.”

Co-author William Jungers, PhD, Distinguished Teaching Professsor, and Chair of the Department of Anatomical Sciences at Stony Brook University School of Medicine, emphasized that the team’s reconstruction and findings also reveal that some Miocene apes may represent a more appropriate model for the ancestral morphology from which hominins evolved than do existing great apes and particularly the chimpanzee.

“Living apes have long and independent evolutionary histories of their own, and their modern anatomies should not be assumed to represent the ancestral condition for our human lineage,” explained Dr. Jungers. “But we need a better understanding of the paleobiology of Miocene apes in order to properly inform us as to how and when walking on two legs became part of our heritage.”

The research leading to the findings was supported in part by the Fulbright Commission and the Generalitat de Catalunya of Spain, the Wenner Gren Foundation, and the National Science Foundation.

The Department of Anatomical Sciences is one of 26 departments within the Stony Brook University School of Medicine. The department includes graduate and doctoral programs in Anatomical Sciences. Fields of study include research on human evolutionary anatomy, morphology and vertebrate paleontology. Many faculty members in the department are also participants in an interdepartmental graduate program in anthropological sciences that is recognized worldwide for its faculty and research strengths in functional morphology and human evolution.